String Theory's Star on the Rise

Not far from where I do my shopping in the Hollywood Farmer's market is the Hollywood walk of fame, where various stars of screen, stage, radio, etc are celebrated with a star in the pavement/sidewalk when they rise to a certain level. I never thought I'd see the day when someone would get a star for contributions to the popularisation of science on television (Carl Sagan never got one), but look what I stumbled upon earlier this week (I was so impressed I asked a tourist to take a shot of me): 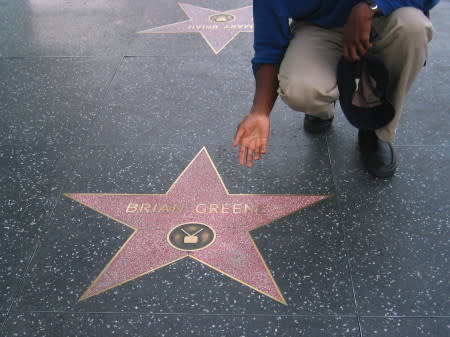 Brian did do superb work in telling the story of fundamental physics in that series of documentaries on PBS ("The Elegant Universe", for those of you who've not seen them, same name as the best-selling book), and captured the imagination of a whole new generation of viewers. Well deserved. Yeah, I know that some people who just have it in for string theory are going to be annoyed at this, but please try to keep your eye on the big picture. This is good for science. May it open the door for more recognition of science in mainstream popular culture, which as you know from reading this blog, is a subject dear to my heart. -cvj