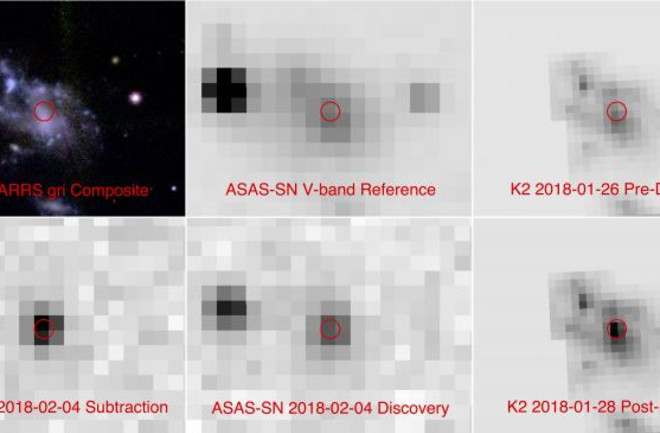 The top left panel shows a color composite image of the galaxy that holds SN 2018oh. This image was taken with the Pan-STARRS1 telescope. The top middle panel is the same galaxy without the supernova emission. The top right panel shows a similar image taken with NASA’s Kepler Space Telescope. The bottom panels show corresponding images from the ASAS-SN survey and Kepler of the supernova. (Credit: Ben Shappee/ASASSN/NASA)

Astronomers studying a violent stellar explosion have witnessed a unique supernova phenomenon that’s like nothing they’ve seen before.

Researchers discovered the supernova, known as ASASSN-18bt (or SN 2018oh), this past February. And, strangely, within the early stages of the stellar explosion,  researchers saw an unusual burst of light emerge. New analysis of this unique supernova could help researchers gain insight into the still-unclear process of how stars die and explode.

SN 2018oh is a Type 1A supernova, one thought to be created from a white dwarf, the core of a star after it’s used up all of its fuel. Type Ia supernovae occur when material from a nearby star is added to the white dwarf, but exactly how this mechanism works is still a mystery to astronomers.

These types of supernovae are important because they create many of the elements common in the cosmos and also because astronomers use them to gauge cosmic distances.

Supernovae usually emit light in a gradually-increasing amount, so seeing a sudden burst of light was extremely unexpected.

This emission could have been created by the collision between the exploding white dwarf and its companion star, previous research has suggested.

But the follow-up data from SN 2018oh doesn’t fit predictions for how this should look, Carnegie astronomer Tom Holoien, a member of the team that discovered and now studies the supernova, said in an accompanying statement. “Other possibilities, such as an unusual distribution of radioactive material in the exploded star, are a better explanation for what we saw. More observations of ASASSN-18bt and more early discoveries like this one will hopefully help us differentiate between different models and better understand the origins of these explosions,” Holoien added.

So, potentially, this emission could have been created by radioactive material distributed in an unexpected way in the exploded star. But, as Holoien explained, more observation and analysis will be required before a formal conclusion can be reached about this supernova.

These findings support recent work from the Carnegie Supernova Project that suggests that there may be two different variations of Type Ia supernovae, some that display this kind of early emission, and some that don’t.

“Nature is always finding new ways to surprise us, and unique observations like this are great for motivating creative new approaches to how we think about these explosions,” Carnegie’s Anthony Piro, who analyzed the strange emission, said in the statement.