Stellar tantrum blasts away part of its planet's atmosphere!

Life must suck for HD 189733b. It's a planet orbiting the star HD 189733, about 63 light years from Earth. It's similar to Jupiter, being slightly more massive and slightly bigger. Unlike our own big brother, though, HD 189733b is far closer to its parent star, orbiting just about 4 million kilometers (about 2.5 million miles) above its surface! That means the cloudtops of the planet are at a scorching 840°C (1500°F), so hot that the atmosphere of the planet is getting blown away by the star itself, creating a comet-like tail of gas escaping from the planet. And now, adding insult to injury, astronomers have discovered that the star is prone to cosmic hissy fits -- and this may actually blow torch even more air from the planet. 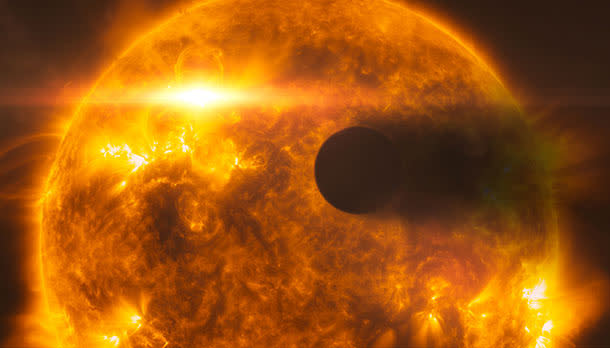 [Illustration by NASA, ESA, and L. Calçada] This pretty nifty: the researchers targeted the star and planet using Hubble in 2010 and didn't see anything amiss. In 2011, though, they observed it with Hubble again, but also used NASA's Swift satellite, which is sensitive to high energy emission like extreme ultraviolet and X-rays. They happened to be looking when the star erupted in a massive flare, quickly quadrupling its brightness in X-rays alone. And because the planet is so close to the star, it took the full brunt of this event, its atmosphere puffing up and actually getting blasted away into space by the fierce light from the star! Just a few hours later, as seen from Earth, the planet passed directly in front of its star (like Venus did during its transit earlier this month). The atmosphere by this point was really streaming away from the planet in the aftermath of the flare, and was also blocking a bit of the star's light. In the Hubble data the astronomers not only detected that absorption, but they could measure it to see how much hydrogen the planet was losing. It turns out something like 1000 tons of hydrogen was screaming away from the planet every second! And that's a lower limit; they could only detect neutral hydrogen -- that is, atoms that still held on to their electrons. There was probably plenty of ionized hydrogen they couldn't detect. NASA put out a short video that explains this as well:

-- but this is the first time changes in the atmosphere have been detected. We're really getting good at examining these planets! HD 189733b has been seen to have hydrogen, water vapor, carbon dioxide and carbon monoxide in its air (see Related Posts below for more on that), and we've been able to literally map the distribution of heat in its atmosphere

. Incredible. It's amazing to think that we're watching planets boil away as they get blasted by their stars! A third planet like this has been found

that's not a gas giant, so it really is boiling, its surface a seething cauldron of molten materials. The Universe is a crazy place. And the more we learn about it, the crazier stuff we find. I'll note that the Hubble observations were made using the Space Telescope Imagine Spectrograph, a camera I worked on back in the day

. We used it to observe stars, supernovae, black holes, asteroids, and even HD 209458b in fact. But I never thought it would one day be used to watch as a planet slowly evaporated into space. Crazy. And so, so amazing.