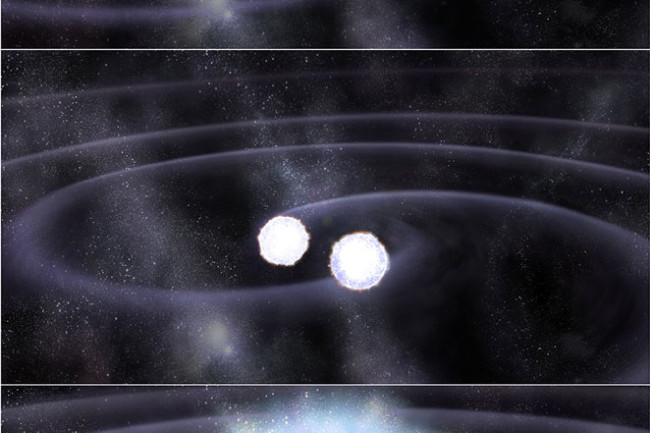 Two white dwarfs merge into an unstable star that explodes as a type Ia supernova. | NASA/CXC/M.Weiss

In January 2014, astronomers watched a rare supernova light up and began filling in one of the most embarrassing gaps in their understanding of the universe.

The explosion, dubbed SN2014J, belongs to a class of supernovas called type Ia. These objects all apparently blow up the same way, allowing astronomers to use them as standard beacons for reckoning the size and structure of the cosmos. But nobody knows exactly how type Ia supernovas work, leaving the queasy possibility that those inferences are full of errors.

SN2014J is changing that. The star exploded in the neighboring galaxy M82, about 12 million lightyears away, making it the nearest type Ia supernova in decades. It’s close enough that researchers could confirm current theories indicating the supernova started out as a white dwarf — a small, collapsed stellar cinder. Details about the explosion specifically suggest that it occurred when one white dwarf collided with another.

Collectively, the findings support the notion that type Ia supernovas suffer from “stellar amnesia,” meaning that they “forget” the specifics of their earlier selves and become largely identical once they go off — just as astronomers hoped. Only in the counterintuitive world of cosmology can amnesia lead to greater awareness.