Standing with Charlie Hebdo and Against Extremism

The murderous terrorist attack on a French satirical newspaper, which left 12 people dead, has shocked and outraged the world. Islamic extremists targeted Charlie Hebdo, the Paris-based paper, for its cartoons lampooning Islam. But it's worth noting--as many have--that the paper poked fun at politicians, celebrities, and all the major religions. 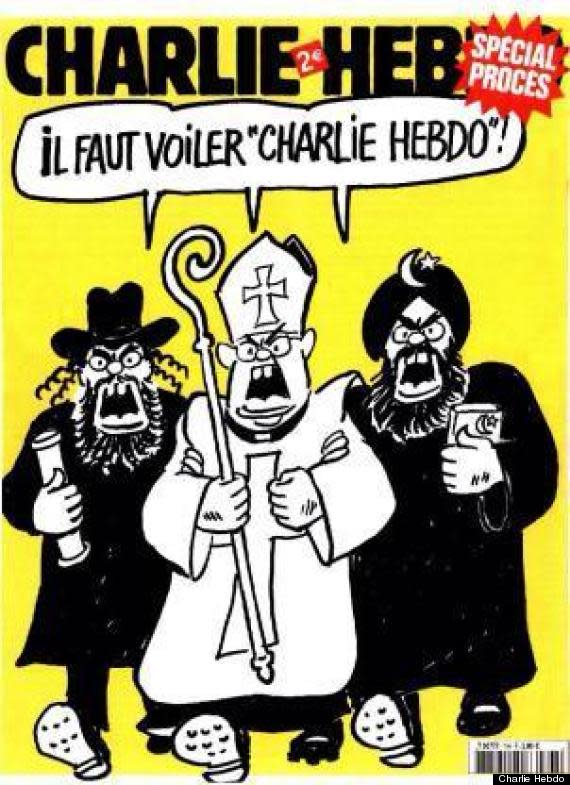 This caption explains the cover above. Vice has a good story about the paper's anti-religion and anti-establishment history. After I heard the news of yesterday's massacre, which killed ten of the paper's staffers, including its top editor (and two police officers), the New York Daily News opinion editor captured how I felt.

If you've ever laughed at The Onion or The Daily Show (or even Andy Borowitz, whatever, I don't judge), this is an attack on you. — Josh Greenman (@joshgreenman) January 7, 2015

Throughout the day, cartoonists from around the world shared how they felt. Here's one from a Washington Post cartoonist:

For more reactions, commentary and updates, see Slate's continuing coverage. (By the way, the slain top editor of Charlie Hebdo had stood tall against previous attempts at censorship and intimidation.) George Packer at The New Yorker has put up a good piece, and so has his colleagues, Amy Davidson and Philip Gourevitch. There are many others who have written eloquently about this terrible event, but the one that really speaks to me (and others, I presume), is this post by New York Times columnist Ross Douthat, particularly this passage:

liberalism doesn’t depend on everyone offending everyone else all the time, and it’s okay to prefer a society where offense for its own sake is limited rather than pervasive. But when offenses are policed by murder, that’s when we need more of them, not less, because the murderers cannot be allowed for a single moment to think that their strategy can succeed.

How The COVID-19 Pandemic Will Change the Way We Live