Spooky "Dark Flow" Tracked Deeper Into the Cosmos; No Word on What's Tugging at Galaxies 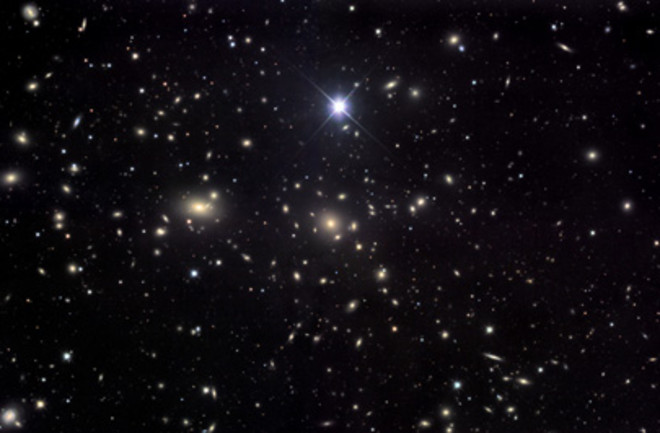 A year and a half ago, the team led by Alexander Kashlinsky of NASA proposed the controversial and ominously named "dark flow," a massive gravitational force that is tugging at galaxy clusters, and that Kashlinsky says could be coming from beyond the limits of our own visible universe. Now the team is back with a follow-up study in The Astrophysical Journal Letters, and Kashlinsky says the team has tracked the dark flow out twice as far as before. A quick note on dark flow: The reason Kashlinsky noticed it is thanks to the cosmic microwave background, a signature left over from 380,000 years after the Big Bang that permeates the universe. "The hot X-ray-emitting gas within a galaxy cluster scatters photons from the cosmic microwave background (CMB)," the NASA press release says. "Because galaxy clusters don't precisely follow the expansion of space, the wavelengths of scattered photons change in a way that reflects each cluster's individual motion." Using data from the Wilkinson Microwave Anisotropy Probe (WMAP), which mapped the microwave background, the team managed to find this tiny effect when they looked at huge clusters of galaxies, and found something totally unexpected. What the 2008 find showed was that these galaxies were moving in a way that the distribution of matter in our visible universe couldn't explain, traveling a million miles per hour in a particular direction. Says Kashlinsky:

"This is not something we set out to find, but we cannot make it go away" [US News & World Report].

The clusters appear to be zooming along on one particular line aimed at Hydra, Kashlinsky said, but "right now our data cannot state as strongly as we'd like whether the clusters are coming or going," to or from Earth [USA Today]

. While the universe itself keeps on expanding and expanding in all of the directions it can whiz, no one direction should be preferred, which is why the dark flow is so damned interesting.

According to our best understanding of how the matter in the Universe was distributed, there's no way of accounting for this flow. The obvious alternate explanation is a little unnerving: something outside of our visible universe is pulling on the matter that we can see [Ars Technica]