I've been so taken with HiRISE lately that I haven't written much about the Mars rovers Spirit and Opportunity. They've been traversing Mars for almost six years now, taking tons of images and great in situ data. And now I feel remiss, because Spirit has stumbled on something very cool. These images were taken on Sol 1858, just a few days ago (a Sol is a day on Mars, about a half hour longer than an Earth day). Spirit has been tooling around a high plateau called Home Plate, because it's shaped like, well, a home plate in baseball. There's evidence that water flowed in this area a long time ago, and as I looked over the images it was pretty obvious. Check out this first one:

The ground is covered with granular material, obviously ground up rocks and such. A little bit of the underlying bedrock (the Mars folks at JPL -- keeping the tradition of naming formations they find -- are calling it Baltra) is showing through, indicating wind erosion, typical of just about anywhere on Mars. But I noticed that the pebbles look almost sorted in size, which is what you expect when water flows over loose pebbles. But then the next frame, taken just a few meters east of the first, really caught my eye!

The assorted rocks are all jagged, indicating they're not as old as the pebbles. And they have an odd structure, which immediately struck me as looking like regmaglypts, the little thumbprints or scoop marks you see in lots of meteorites. Then I saw the next picture, and bang! 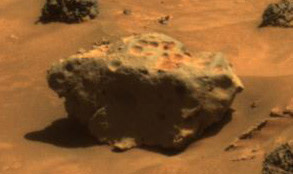 AWESOME! It looks like a meteorite... and there's precedent. Two years ago, Spirit found what's thought to be a meteorite on the surface of Mars (see the image on the right). This newer image is higher resolution, presumably because the meteorite is closer to the camera than the first one was, just a little distance from Baltra. Note the similar structures, with some scooping, some obvious erosion-carved pocks, and even the color. This second meteorite -- which is about 30 centimeters across -- is a slightly different color, which may be due to different color balancing, or it could be real and from the slightly different color of the sand embedded into the rock from the pervasive winds. But there's still more! The ground crew at JPL commanded Spirit to rotate the camera to the east a bit, and in this image you can see the edge of the pebble field.

It looks like the pebbles end and then there's some sort of lava flow; I'm guessing if water flowed here a few million years ago, the raised lava bed there formed a natural (duh) bank for it (JPL named it Floreana), so that's why there are no more pebbles. The grayish spiky things may be minerals or crystals of some kind; I haven't seen anything like them in previous rover pictures, but the resolution is bit too low to tell what they are. So then the camera panned up to get more context for the previous shots, and this one seems to confirm the idea that we're seeing some sort of lava:

To the right there is what looks like a spatter cone (named Rábida), a volcanic structure formed when lava spurts out of vent in the ground and, well, spatters around. The rock is rough, and flattens out around the cone. Clearly this is why the water flow stopped there. More clear evidence of past eruptions can be seen in this next image, located almost 180 degrees around from the first series:

The layering of the rock may be due to periodic eruptions from the nearby vent, though they almost look like uplifted sedimentary layers (nicknamed Isabela); if water once flowed here a long time ago, it may have deposited material into those layers, and then when the vent formed it pushed up from below, causing the tilt. I see that same thing every day when I look at the foothills of the Rocky Mountains in Boulder! Funny, you wouldn't expect to see a landscape on Mars that would literally remind you of home. But physical processes are the same everywhere, so you might expect to see some similarities. In fact, when the ground crew commanded Spirit to pan a bit more and zoom out (again, for context), it saw an incredible view that really does look like Earth!

You can see the lava to the left and the Isabela layers in the center, but the formations on the right are a little baffling. Wind erosion carves odd shapes in the rock (remember the Bigfoot on Mars?) so I'm sure this is just another coincidence. Though I have to admit, it looks an awful lot like the Galapagos Islands, too. Hard to say. It may be a trick of light and shadow, or just the time of year.