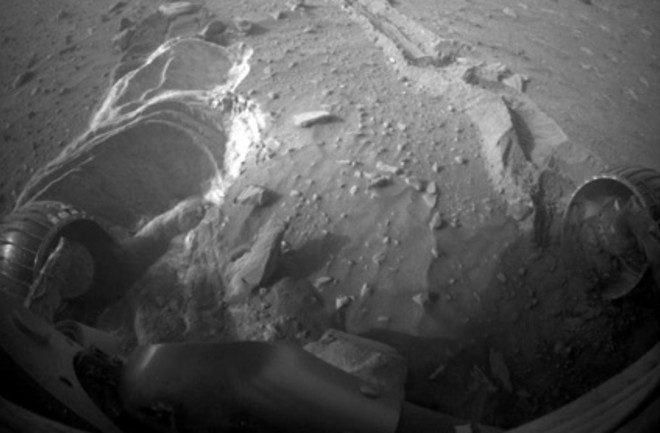 It's hard to say goodbye to old friends. We've known since the springtime that NASA's Spirit rover, which roamed the surface of Mars for more than six years, was probably doomed to a frozen death. But in the last week, NASA has repeatedly called the rover, hoping that the endurance explorer somehow managed to conserve enough power during the martian winter to respond. So far, no luck. Spirit has not phoned home.

Spirit’s been on Mars since January 2004 and already survived previous winters, which run from May through November. With sunlight reaching Spirit at a weak angle, the rover hibernates and uses the scant solar power to recharge batteries and heat itself to –40 degrees [Scientific American].

But this winter it could not. With a wheel caught in the loose martian terrain, Spirit could not drive to an opportune position to capture some sunlight. As a result, the rover

probably dropped to -67 degrees during the brutal winter on the red planet, too cold for its heaters or machinery to function. This looks like the end of the line. In January, after months of fruitless attempts to extricate Spirit from its quagmire, NASA scientists conceded

that the rover would rove no more. Now, NASA says, it would be a shock if Spirit manages to wake up and answer hails from Earth. Its creators will keep trying.

"This has been a long winter for Spirit and a long wait for us," said Steve Squyres, the Cornell astronomer and chief scientist for both rovers. "Even if we never heard from Spirit again, I think her scientific legacy would be secure" [San Francisco Chronicle].

That's putting it humbly on Squyres' part. Spirit turned an expected Mars mission lifetime of 90 days into six years, a 24-fold improvement. Spirit provided invaluable evidence supporting the case that our planetary neighbor was once hospitable for life, and snapped more than 100,000 pictures. You can see some of its best in our photo gallery