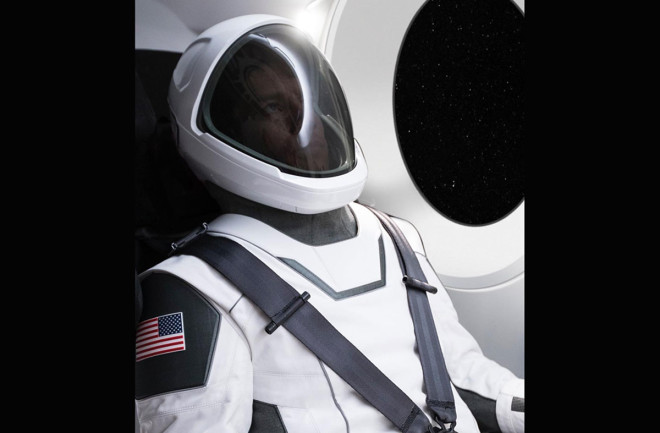 SpaceX's new spacesuit design, modeled by a SpaceX engineer. (Credit: SpaceX) When SpaceX launches its first crewed flights next year, they'll be crossing the Kármán line in style. In an Instagram post, CEO Elon Musk unveiled the company's new space suits, noting the pains that went into creating a design that was both safe and snazzy. "Was incredibly hard to balance esthetics and function. Easy to do either separately," he writes. A sleek helmet and minimalist design add to the echoes of haute couture, although actual specifications for the suit, such as whether it's a single piece and how flexible it is, are lacking for the moment. Musk promises more details in the days to come. The suits are meant to be worn by astronauts inside the capsule, as a precaution against the possibility of a sudden depressurization. Musk says that the design has already been tested at pressures double that of what astronauts would experience in a total vacuum, hinting that they're ready for deployment. The slim design recalls the "Boeing Blues" suit unveiled by the aerospace company earlier this year, featuring a zippered entry and touch-screen sensitive gloves. That suit is meant for passengers aboard Boeing's Starliner spacecraft, also tentatively set to begin manned flights to the ISS next year. With clean lines and a strict black and white color scheme, SpaceX's suit appears to mimic the design aesthetic of the company's Dragon capsule. This isn't very surprising given Musk's attention to detail, and the suit's reveal gives the company another chance to garner media coverage. They faced a sharp setback last year, following the explosion of one of their Falcon 9 rockets on the launchpad, a mishap that delayed the expected launch of the next-generation Falcon Heavy rocket. In the meantime, SpaceX has continued delivering payloads to the ISS, and has rescheduled the Falcon Heavy's maiden flight for this November — although Musk seems to be downplaying expectations significantly. That being said, they appear to be still on schedule to launch crewed flights sometime in 2018, which will include a test launch and a trip around the Moon for two paying customers, which would mark a first for commercial space flight. If everything goes to plan, those crew could realize another, perhaps more coveted, milestone as well — best dressed astronaut.