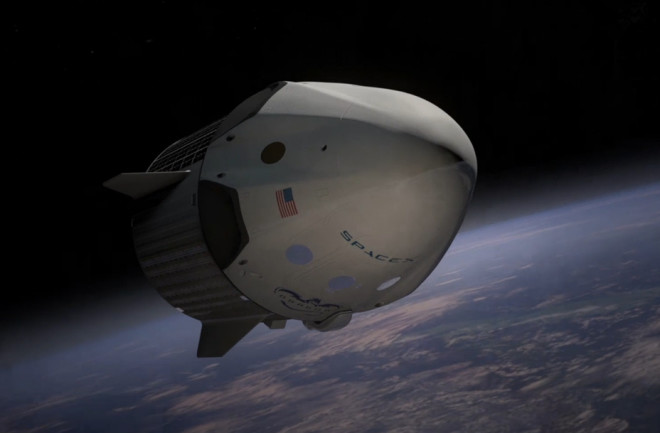 An artist's rendering of SpaceX's Dragon V2 spacecraft. (Credit: SpaceX) In 2012, SpaceX’s Dragon became the first commercial spacecraft to dock with the International Space Station and return to Earth. On Thursday, the California-based company unveiled its Dragon V2 craft, which is designed to carry another kind of cargo into space: seven astronauts. The Dragon V2 is remarkable in a number of ways, but its reusability is what SpaceX founder Elon Musk says will change the economics of space travel. After docking with the ISS, the Dragon V2 is designed to return to Earth and touch down anywhere on land with the accuracy of a helicopter. Then, the ship will just need refueling and it’ll be ready for another mission. “As long as we continue to throw away rockets and spacecraft, we will never have true access to space,” Musk said during the V2 unveiling Thursday. “It will always be incredibly expensive. If aircraft were thrown away after each flight, very few would be able to fly.”

The Dragon V2 is equipped with eight SuperDraco engines, each capable of producing 16,000 pounds of thrust. More notably, the engines were constructed using a 3-D printer, and once the craft flies they would become the first printed rocket engines in operation. The V2 is designed to automatically dock with the ISS without the aid of the orbiter’s docking arm, another first. The inside of the Dragon V2 has also been re-envisioned: Rather than countless buttons and nobs, the craft’s control panel is a Star Trek-like touchscreen that pulls down from the ceiling.

The Dragon V2 is still a few years from launching its first manned test flight. However, the United States is in the market for an independent taxi service to space. Since retiring its space shuttle program in 2011, the U.S. has had to shell out $70 million per seat for its astronauts to ride on the Russian Soyuz spacecraft. The current agreement with Russia expires in 2018, which could be just in time to foster a new partnership with an independent service. SpaceX is competing with companies such as Boeing, Sierra Nevada and Blue Origin to become the first commercial company to transport astronauts into space, possibly as early as 2017. Check out the video below to see the Dragon V2's capabilities.