SpaceX Just Launched Israel's Lunar Lander off to the Moon 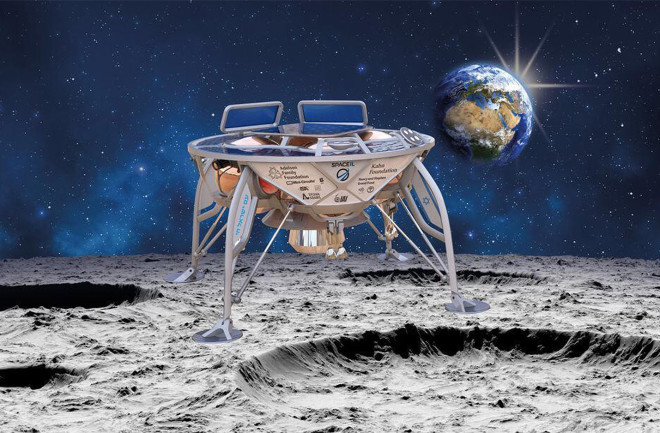 If Beresheet's landing is successful, it will make Israel the fourth nation to land a spacecraft on the moon. (Credit: SpaceIL)

The Israeli spacecraft Beresheet launched this evening on a trip to the moon, where it hopes to touch down in two months. This will be the first attempt at a lunar landing by a private company, and it’s also the first launch by an Israeli spacecraft. Beresheet took off from from Cape Canaveral on one of SpaceX’s Falcon 9 rockets at 8:45 Eastern time tonight.

An hour after launch, Beresheet’s engineers reported that the spacecraft had deployed its landing legs as expected, and was sending back its first signs of life, indicating a safe entry into space.

Beresheet’s creators are Israel Aerospace Industries and the nonprofit company SpaceIL, who built the spacecraft for $100 million, including launch costs — a tiny cost for a space mission. NASA is providing support to track and monitor the spacecraft on its journey and landing.

Beresheet’s first maneuver will take place about 9 hours after launch, when engineers will also check to make sure everything is working as expected. After that, it will take a month to reach an orbit 250 miles from Earth, and then continue to circle farther out until it is captured into a lunar orbit.

Previous missions have reached the moon much faster. But Yigel Harel, the head of SpaceIL’s Spacecraft program, pointed out during a press conference that, “We realized right at the beginning that we don’t have a Saturn V engine. So we have to do it by commercial launch.” This means they’re sharing their payload with another satellite launching to Earth orbit, and that they can’t choose their initial orbit very carefully. This is what makes NASA’s offer to track the spacecraft with its Deep Space Network and lunar orbiters so valuable.

Upon landing, Beresheet should transmit data from the moon for about two days. It carries a magnetometer, so it can measure magnetism in its landing area in Mare Serenitatis, a visible region on the lunar near side. The moon doesn’t have a global magnetic field like Earth does, but specific regions and rocks are magnetized, as previous lunar expeditions have found. Mare Serenitatis is one of these regions, and Beresheet aims to collect more data about it. NASA and SpaceIL will share that data, as part of their flight support agreement.

Beresheet will also collect pictures and video while in space, during its descent and while it’s on the moon, and it needs those two days to send all the data home to Earth. The spacecraft is also equipped with the ability to “hop” short distances on the moon, and engineers say they’re confident it carries the fuel to do so. The question will be what its exact landing location looks like, and whether it will be able to hop safely, or will simply stay in place once it arrives. Engineers say they won’t make a decision until later in the mission.

There are no plans for Beresheet to leave the moon, so its creators have also added historical, cultural, and scientific materials on three disks to serve as a sort of time capsule and monument to the first Israeli spacecraft. Its creators say they hope Beresheet, which means “In the beginning,” in Hebrew, will inspire a new generation of scientists and engineers in Israel and across the world.