The private company SpaceX performed a successful "drop test" of their Dragon capsule on August 12. 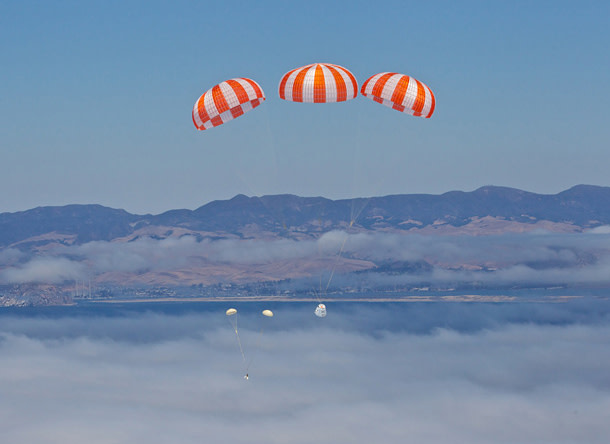 The Dragon capsule is what will ferry supplies and astronauts into space and to the International Space Station -- and bring them back home to Earth. The drop test was done to make sure that the parachutes would deploy correctly and to measure the forces incurred on the capsule. A helicopter lifted the capsule to 14,000 feet and dropped it over the Pacific Ocean. As you can see in the picture, all three 'chutes deployed well. The smaller object you can see on the left with two smaller parachutes is a device that opens up drogue 'chutes first, designed to slow and stabilize the capsule while it is still at high altitude. Once it's stable, the larger parachutes deploy. This is similar to how other capsules historically have come back home. There's a pretty nifty video of all this on the SpaceX site, too. NASA has contracted with SpaceX to use their Falcon 9 rocket and Dragon capsule, so I'm pleased with the progress being made.