A month ago my old friend Dan Durda sends me an email. He tells me Kim Poor, who runs the space art gallery NovaSpace, wants to send me something, so can I send along my snailmail address? Sure, I reply, and do so. Is he sending me art, I wonder? Nah, probably just a clipping or something from a paper. I forget about it. Fast forward to the last day at work before TAM 5. The mail comes in, and it's from Kim. Oh yeah, I think. Right. I open it up. Oh cool, it's a flyer for SpaceFest 2007, a convention of sorts for space enthusiasts. Carolyn Porco will be there talking up Saturn, and a whole bunch of Apollo astronauts. Nifty. There's a letter with the flyer, and I'm guessing Kim was asking if I'd blog about the meeting to promote it. Bzzzt. Kim was inviting me to speak at the meeting! Oh, wow. Moreover, he wants me to give my Moon Hoax talk, where I trash those twinkies who think the Apollo mission was faked. Holy frakking golram! I've finally arrived! 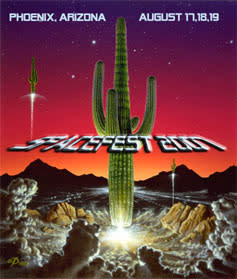 I do a little dance in my office. Alan Bean will be there. Gene Cernan. Charlie Duke-- Charlie Duke, who emailed me and congratulated me on my page debunking the Fox TV show! Buzz Aldrin will be there. Yes, the second man on the Moon, the guy who punched Bart Sibrel right in the kisser. Oh man. Then reality set in. I have to give my Moon Hoax talk to a bunch of astronauts! Yikes. I better make sure I know my stuff. Then reality really set in. Houston, I have a problem. You see, as you might expect, the astronauts are not big fans of the whole Moon Hoax thing. You might imagine why, since they walked on the Moon. More than a few of them don't want to discuss it, and many think that no one should even talk about it. I've had a couple blow me off at meetings because I debunk it. They think it should be ignored. I disagree. I think it's OK for them to ignore it, but -- and yes, this is distasteful to admit -- it's a part of Americana now, along with dumb 9/11 and JFK conspiracy theories. We're stuck with it, and so someone has to deal with it. It's beneath the astronauts' dignity to address it, but luckily I have no dignity. I'm only happy to oblige. Whether the Moon walkers like it or not, I have their backs. I can live with that. Now I only have to figure out how to explain it to them. Cuz I'm going to SpaceFest in August! Woohoo!