Space Travel May Contribute to Alzheimer's Later in Life 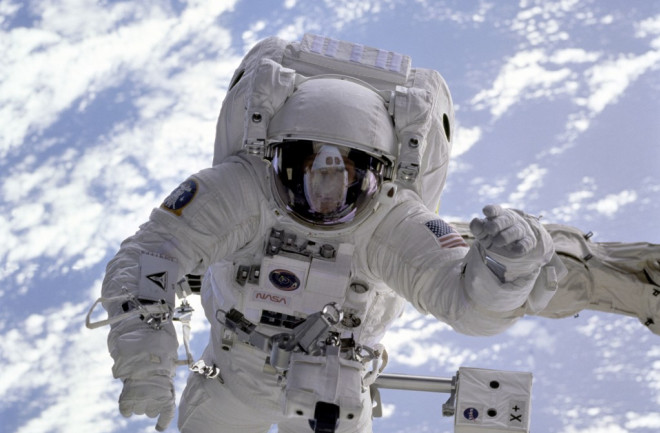 Astronaut Michael Gernhardt, attached to the Shuttle Endeavour's robot arm during a spacewalk on the STS-69 mission in 1995. Thanks to NASA and emerging commercial space flight companies, there will likely be more astronauts in the future, and they'll be traveling farther and more frequently into space. Space travel has known risks for bones, eyesight and other bodily systems, but a new study is the first to show that space travel could lead to Alzheimer's disease later in life. Outside the protection of the Earth's magnetic field, astronauts are exposed to cosmic radiation. These high-mass, highly-charged particles can penetrate solid objects---spaceships, astronauts and brains included. Scientists recently conducted a study of mice to determine what would happen to their brains in the presence of cosmic radiation. They exposed mice to radiation relative to body weight comparable to what a human would receive on a round-trip mission to Mars. The radiation was, however, given in a single dose rather than over the course of the two or three years it would take to actually get to Mars and back. The results, published in PLoS One this week, showed that the irradiated mice were more likely to fail memory tests during the months after the exposure. Despite having experienced multiple foot shocks, the irradiated mice were less likely to remember and avoid future shocks, demonstrating a loss of cognitive abilities. After a few months, the mice's brains also showed an increase in plaque associated with an accelerated progression of Alzheimer's disease. The researchers say this plaque accumulation may be due to DNA damage preventing the brain's immune response from doing its job. Space tourism is certainly an alluring concept, but our technology still has a long way to go before space becomes a vacation destination. Image courtesy of NASA