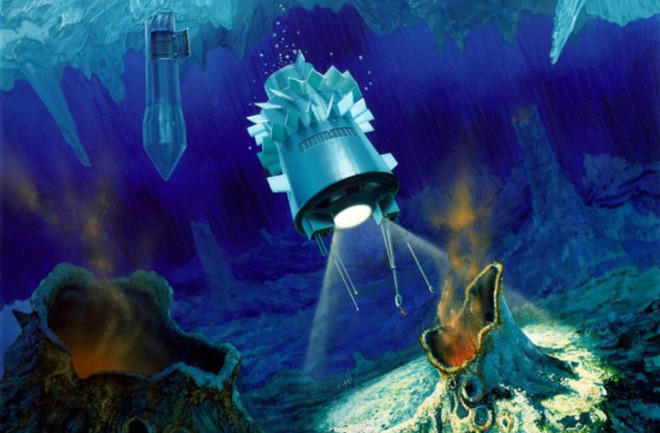 Artist’s impression of a cryobot and submarine in the ice on Jupiter’s. (Credit: Europa. NASA/JPL)

One of the most profound and exciting breakthroughs in planetary science in the last two decades has been the discovery of liquid methane lakes on the surface of Saturn’s largest moon Titan, and liquid oceans under the icy surfaces of many of the giant gas planets’ other moons. Thrillingly, these some of these “waters” may actually harbor life.

Unfortunately, we don’t know much about them. Probes such as Juno and Cassini can only get so close. Also, subsurface oceans can only be sensed indirectly. The European Space Agency’s Huygens probe did land on Titan in 2005, but on a solid surface rather than on liquid. So how can we explore these seas?

An exciting idea being explored is developing submarines to send through space to the moons. Over the next two years, NASA is devoting half a million dollars to researching the prospect of sending such a vehicle to Titan. But there are other studies out there, too – with targets including Jupiter’s Europa and Ganymede, and Saturn’s Enceladus. But are such missions actually within our technological reach?

The Challenges of a Titan Submarine

Kraken Mare is thought to be the largest sea on Titan with an area of 400,000 square kilometers – larger than Earth’s Caspian Sea. But it’s not made of water – we have good evidence that this is instead a lake of methane, ethane and nitrogen.

So what would a submarine on Titan look like? It turns out that a design like a traditional submarine, with a high “aspect ratio” (ten times as long as it is wide), would minimize drag and could fit inside a launch vehicle. Most deep space missions operate autonomously and a submarine would be no different. However, they would have to go to the surface for periods of time. Radio and microwave signals get absorbed very quickly in oceans, so to send a signal back to Earth the antenna would have to be above the surface.

Another issue is electrical power – this obviously cannot be provided by solar panels as it is on many spacecraft. As part of a recent study, engineers investigated various alternatives, including compact nuclear reactors and fuel cells, but concluded these were too heavy. Instead, they proposed that electricity could be generated from the radioactive decay of plutonium – a technique similar to that powering Cassini.

Some of the shallow shorelines of Kraken Mare are only 30-40 meters deep but it is thought to be 150 meters at its deepest. As you dive down beneath the surface the pressure increases because of the weight of the liquid above. On Earth, you can feel this in your ears when swimming underwater. Methane is about four times as dense as water, but gravity on Titan is about seven times weaker than Earth, similar to our moon. So submarines diving down 150 meters on Titan don’t need to withstand the same pressure as they would on Earth.

A huge difficulty with these missions is to package the submarine into a system that can be launched on a rocket, survive in deep space during the roughly seven-year cruise to Titan, and then make it through a hypersonic descent to the ocean. It turns out that spaceplanes, such as the X-37, are ideal and would work well when descending into Titan’s thick hydrocarbon atmosphere. The spaceplane would launch from Earth on top of a rocket with the submarine inside. Once at the Saturnian system, the spaceplane would then land on Kraken Mare and deploy the submarine.

But perhaps the hardest thing will be to control the temperature inside the submarine – even though the sea is a somewhat frigid -180°C, the radioactive decay of the plutonium produces a lot of heat that needs to be dissipated.

Descending to the Depths of Subsurface Oceans

Some tens of kilometers below the icy surface of Europa, meanwhile, we have good evidence that there could be a liquid salt water ocean. In fact, there could be subsurface liquid water oceans on a number of the moons of Jupiter, Saturn, and possibly Uranus and Neptune. As water is a prerequisite for life on Earth, this raises the exciting notion that these moons may be habitable. This is why many planetary scientists are interested in ideas to explore under the ice – either with submarines or ice penetrating radar.

However, getting a submarine through at least 5km of ice makes putting a submarine on Titan look very easy. Cryobots – robotic devices that penetrate ice by melting it, allowing gravity to pull the robot downwards – have been proposed as a way to deliver a submarine into Europa’s oceans.

But energy is needed both to heat up the ice and then melt it -– a typical power station would be able to provide this in about five minutes. But it’s not going to be practical to send a power station to Europa. And with the amount of power available to most spacecraft, it would take a cryobot about eight years to get through the ice.

One way this problem can be solved is to use a compact nuclear fission reactor, which will do the job in about six weeks. But such a nuclear reactor wouldn’t fit into the cryobot. One problem solved, another is created. To get around this, one idea involves leaving the reactor on the surface and sending the electrical power to the descending cryobot as light along a fibre-optic cable. Once the cryobot has reached the ocean it would deploy a submarine to take measurements. Communications with the cryobot could be achieved by sound waves in the ocean (think whales talking to each other) and then sent back up the connection to the surface vehicle for transmission to Earth.

Amazingly, these ideas have actually been tested in Antarctica. But one significant challenge is that, as the water melts, sediments build up ahead of the probe. Another is that the cryobot and submarine would have to undergo expensive extreme sterilization to avoid introducing any contamination to an environment that may harbor life.

So there are big hurdles to clear. But NASA does appear committed. It’s mission concept could possibly executed in the mid 2040s. And after Titan, who knows, we may even be hunting for hydrothermal vents on Europa.