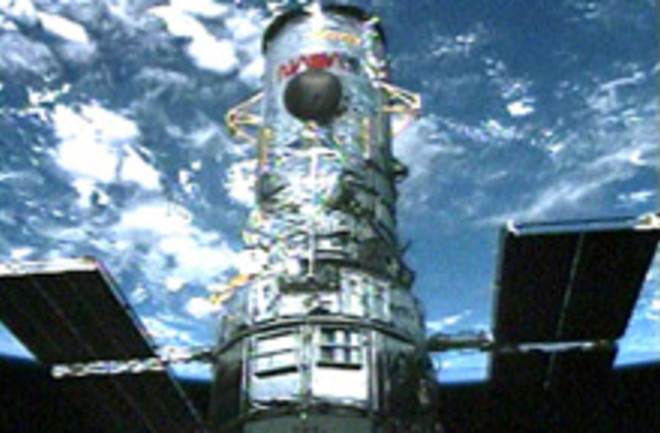 Yesterday, about 350 miles above western Australia, two massively expensive pieces of space hardware rendezvoused in a delicate orbital dance. The space shuttleAtlantis arrived at the Hubble Space Telescope for the telescope's fifth and final upgrade, and met the telescope in orbit as it circled the Earth at 17,200 miles per hour.

With mission commander Scott Altman at the controls, Atlantis eased up within 30 feet of NASA's flagship observatory, bringing the ship close enough for a capture attempt. Mission specialist Megan McArthur limbered up the shuttle's robot arm and used snares at its end to latch on to a pin-like grapple fixture on the side of the gleaming telescope. "Houston, Atlantis. Hubble has arrived onboard Atlantis," said Altman [Florida Today blog].

The astronauts audibly gasped as they drew up to the 12-ton telescope.

“Just looking out the window here, and it’s an unbelievably beautiful sight,” said John M. Grunsfeld, a veteran astronaut. “Amazingly, the exterior of Hubble, an old man of 19 years in space, still looks in fantastic shape.” Dr. Grunsfeld, who is on his third Hubble repair trip, was one of the last humans to see the telescope in March 2002 and arguably knows it better than anyone on or above Earth [The New York Times].

While Hubble still looks magnificent from the outside, astronauts have a long list of parts to fix or refurbish. This morning, in the first of five spacewalks, the astronauts' main objective is to

install a powerful new camera about the size of a grand piano in Hubble - one that's 30 times more powerful than the old one and capable of allowing scientists to look back more than 13 billion years to when galaxies were just starting to form.... Not only can the camera peer deep into space, but it's also multi-spectral - allowing scientists to make observations in the infrared, visible and ultraviolet spectra [CBS News].

The spacewalking astronauts are also scheduled to install a new data router today, to replace the one that failed last fall. Atlantis blasted off from Florida's Kennedy Space Center on Monday afternoon. When astronauts later inspected the shuttle's exterior with cameras and a sensor-tipped boom, they found a series of small nicks in some heat shield tiles by the shuttle’s starboard wing.

The dings were caused by launch debris that fell from the shuttle's external tank as Atlantis rocketed toward the Hubble Space Telescope.... NASA said the damage appears only minor and is not expected to be a concern [SPACE.com].