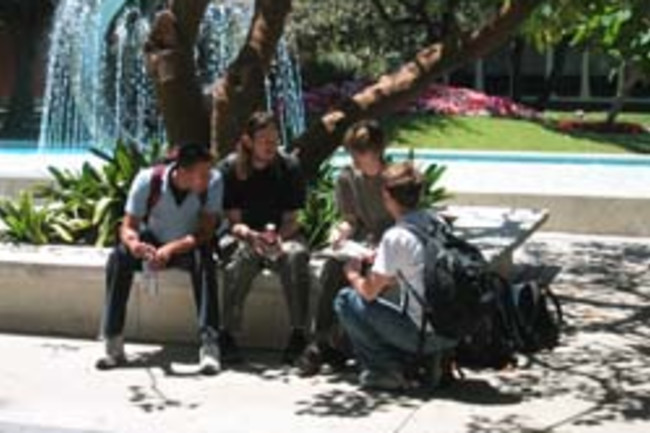 On Friday and Saturday (September 23rd and 24th), the next Southern California Strings Seminar will be happening! It's a regional meeting for people doing research in string theory, and I'd especially like to see more young people come out and take part. We make a special effort to ask the speakers to spend a little time at the beginning of their talk setting the scene (speaking about motivations, what has gone before, etc) so that the series can be of great value to people who are trying to learn what's going on in a particular topic at research level (this can be students, postdocs, or faculty, in fact). If you're doing theoretical physics research anywhere in the Southern California region, and want to take part, please come. See the website for details, and let the hosts -this time it is UCLA- know that you're coming. Here's the introduction that I have on the main page:

Join us as we (members of several of the local groups with interest in string theory and related topics) sit together to discuss new ideas and developments (both general and technical) in the field. The presentations will be accompanied by plenty of discussion and in the first part of each talk the speaker will take special care to set the scene and context of the work in a pedagogical manner so as to encourage participation by younger members of the field.

Also, here's what I mention about the inaugural one, which was in May, hosted by the USC group: 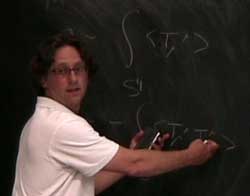 The inaugural event was 20th-21st May 2005, and was hosted at the University of Southern California. It was great fun, and we all learned a lot! We had about 40 participants, from USC, UCLA, UCI, Harvey Mudd College, UCSD, and Caltech, with speakers from some of these places and also from Chicago, Michigan and Stanford.

For those who can't make it to the events, you can find useful video of all the talks from that last one on the website too, and I hope that we'll be able to generate video for the future ones too. -cvj P.S. Technical issue for which some of you might have the answer: If you have a look at the online material for the previous SCSS, you'll see that it has a fully downloadable (and large) Quicktime movie for each talk, and some talks have RealMedia format being streamed. But the streaming file came out to be very inefficient...it rebuffers every 10 seconds and so is almost unwatchable, and I do not know how to fix this. This is because our system does not stream Quicktime, and so I had to convert everything to Real using a plugin for imovie on the Mac. I set the frame rate really low on everything since you only want to see the changes on the blackboard, while keeping the resolution high so that you can read the blackboard. But I could not find the right set of parameters in the plugin to get it to stop rebuffering so often when streaming. If you've any ideas, do let me know, since I'd like to generate some better Real format files so that people don't have to download the .mov format files to their computers. I wonder if the solution is to get Final Cut Pro and then use the plugin in combination with that program? Perhaps there aren't enough parameters to vary with just imovie and the plugin, so Final Cut will give more control.....? Ideas from people who've played with this sort of thing are welcome.