Some Odd Behavior Was Detected in a Distant Galaxy 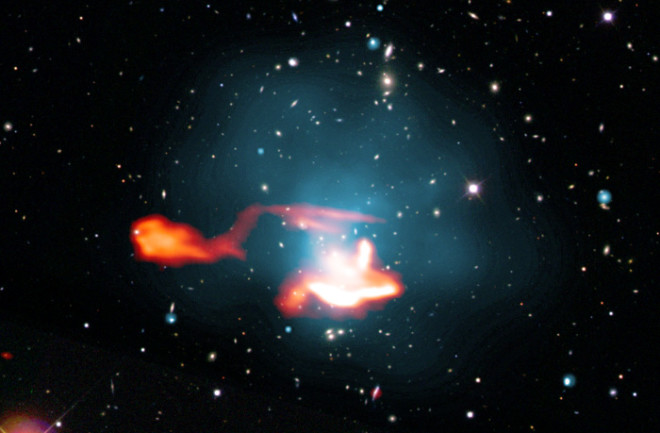 As galaxy in the Abell 1033 system (in orange at left) travels, it leaves a gas trail behind it that is somehow brighter at the oldest end, near a second white-orange galaxy. (Credit: Francesco de Gasperin/Leiden University) Imagine a sparkler, crackling and spitting, leaving behind a faint trail of smoke. Now imagine your surprise as, instead of dissipating away, that smoke trail actually got bright over time, or lit up. That’s effectively what astronomers have seen in the Abell 1033 system of colliding galaxy clusters about 1.6 billion light-years away — and they don’t understand it. “This was totally unexpected,” said lead author Francesco de Gasperin of Leiden University in the Netherlands in a statement. The study appeared today in Science Advances. Instead of a jaunty sparkler producing smoke, it’s an individual galaxy releasing a trail of gas as it travels through the Abell 1033 system. Scientists had expected it to lose energy and fade away over time, but then saw the end of the gas tail — the oldest part — was actually brighter than the middle. While there’s currently no explanation, de Gasperin’s team thinks the location of the bright end might be a clue, since it’s physically near the center of the colliding clusters of galaxies. Perhaps something is transferring the energy released by the collision to the particles in the gas cloud? It’ll take more observations to know for sure. It’s exciting to astronomers because merging galaxy clusters — the biggest structures in the universe — are tough to study, since they can take billions of years mash into each other, and we only have a cosmic snapshot in which to study them. Any day we get to learn more about how they work is a good day. But, beyond that, it’s also exciting to see such new and unexpected phenomena just on their own terms. Science advances in weird fits and starts, and not having the answers yet just means the fun is only beginning.