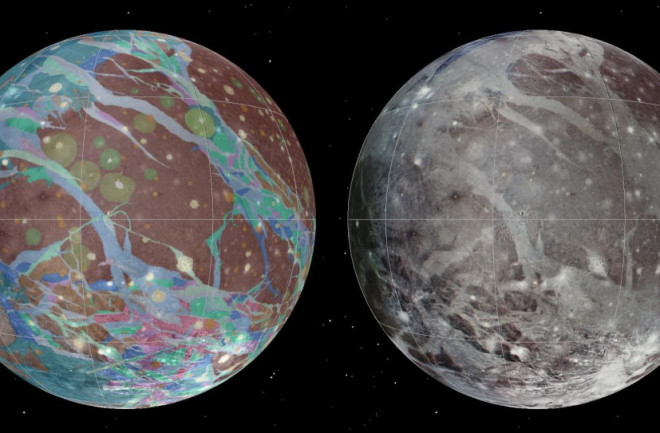 Astronomy can be a funny old science sometimes. Whole planets can suddenly stop being planets. Black holes may or may not exist. And now, after 400 odd years, we’ve finally really figured out what one of the solar system’s biggest objects fully looks like. Scientists this week released the first global geologic map of Ganymede, Jupiter's seventh moon.

When Galileo Galilei first turned his homemade telescope toward the heavens, he saw things no one else had seen. Among them were the four largest moons of Jupiter, now named the Galilean moons in his honor.

Ganymede, the largest of these, is not just the biggest moon in the solar system, it’s bigger than Pluto and Mercury, and has a surface area more than half as large as all the land on Earth. It’s pretty darn big, is what I’m saying (about 3300 miles across).

And yet, its distance meant we could only rarely get a great look at it. Until the Juno spacecraft gets there in 2016, our best views came from the Voyager probes’ flybys in 1979 and the Galileo mission’s 8-year stay around Jupiter, which ended in 2003 when the probe plunged to its death in the gas giant’s atmosphere. But, apparently, planetary scientists have been tirelessly at work stitching together the images and data collected on those trips, because the U.S. Geological Survey has only just published a global geologic map of Ganymede.

Not only is it inherently cool being able to look upon another world’s features as easily as you could a neighboring state’s — this map will be a boon to researchers. It can reveal a tremendous amount about Ganymede’s makeup and its past — not just its own evolution, but also its interactions with the other Galilean moons and countless smaller objects that have crashed into its surface and left craters.

It’s also the first complete global map of an icy moon from the outer solar system, and only the fourth global map of a planetary satellite (after our Moon and Jupiter’s Io and Callisto). Not bad.

The map shows Ganymede to be an icy, mostly inactive world now, but with an impressively active past. The arrangements of its two major types of land features — darker, older more cratered areas, and lighter, younger groove- and ridge-filled areas — have helped scientists split the moon’s history into three major geologic periods, the researchers explain:

The history of Ganymede can be divided into three distinct phases: an early phase dominated by impact cratering and mixing of non-ice materials in the icy crust, a phase in the middle of its history marked by great tectonic upheaval, and a late quiescent phase characterized by a gradual drop in heat flow and further impact cratering.

And as if simply learning about the past and present of one of the solar system’s biggest bodies wasn’t enough, the map will also help future exploration by providing important info on the most interesting regions to study and, possibly someday, even land.

Finally, if you’ve gotten all excited about Ganymede, and these maps and photos aren’t enough, now’s actually a pretty great time to check out the moon and its planetary host for yourself. All you need are some binoculars and a general sense of Jupiter's location, and you’ll be able to follow in Galileo’s footsteps.