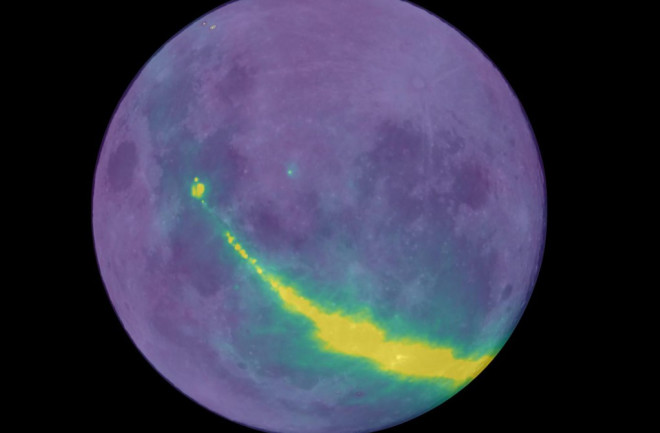 Radio waves from our home galaxy, the Milky Way, reflect off the surface of the moon in this intriguing image created by a research team working with the The Murchison Widefield Array (MWA) radio telescopes in the Australian desert. The remote location was chosen for its extremely low levels of interference from earthly radio stations.

The team, led by Benjamin McKinley of the Curtin Institute of Radio Astronomy, is hoping to detect remote signals from the very early universe.

“Before there were stars and galaxies, the universe was pretty much just hydrogen, floating around in space,” McKinley said in a media release. “Since there are no sources of the optical light visible to our eyes, this early stage of the universe is known as the ‘cosmic dark ages’.”

Shedding light on these dark ages is particularly challenging because of the weak nature of radio signals given off by these ancient hydrogen atoms. And there’s significant interference from brighter objects in the foreground.

“If we can detect this radio signal, it will tell us whether our theories about the evolution of the Universe are correct,” McKinley said.

By using the moon as a point of reference, astronomers hope to come up with an accurate average sky brightness, which is key to unlocking this particular space mystery. And as the team observed the moon to collect its base brightness, they also picked up radio waves from the Milky Way bouncing off our satellite. The team used that to create the composite image above.

Their research was published in the Monthly Notices of the Royal Astronomical Society.