Smash galaxies together... for SCIENCE! 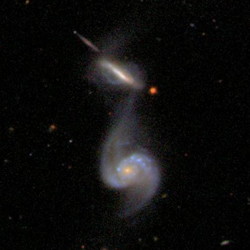 Most people think that science is done by, well, scientists. Men and women in white lab coats buzzing away in a lab somewhere. There are a lot of stereotypes in that description, but the important thing to note here is that science can be done by anyone. You don't need to be in a lab or at the eyepiece or up to your knees in pond scum to be able to make important contributions to science. In fact, with all the digital data coming down from telescopes, just in astronomy alone there are marvelous ways anyone can pitch in. Galaxy Zoo is just such a "citizen science" project -- you can classify galaxies at home, on your computer, perusing their vast database of starry island universes. It's highly addictive -- over 50,000,000 galaxies have been classified by the public so far! And now the folks behind Galaxy Zoo (including my friend Chris Lintott) have a new product that will eat up all your spare time: Galaxy Zoo Mergers. Instead of normal workaday galaxies, this new project displays two or more galaxies undergoing violent collisions, many of which will one day result in the two merging into one bigger galaxy. Our own Milky Way has suffered through many such mergers, growing over time to its present size. Mergers are a basic process in galaxy evolution, and are vitally important to study. In GZM, you are shown a collision image, and you can fiddle with various parameters in a computer model of the event, eventually trying to get your model to look like the actual image. You can change the galaxies' masses, direction, speed, angles, and number of stars in the simulation -- and it uses real physics to determine the shapes of the galaxies as they interact gravitationally! As you tune the simulation, the result is displayed in real time so you can see how well you're doing (and I'll note it ran smoothly, even on my three-year-old Mac laptop). Here's an example I played with:

As you can see, I didn't do too badly. By making the left galaxy lower mass and changing the direction and speed of the collision, I was able to get a simulation that is reasonably close to the real image. I'll note that while it's not too hard to get started, it does take a little bit of patience -- but after only a few minutes I was colliding away. And if it's not easy to start, it's impossible to stop. Like Galaxy Zoo itself, this is the crack cocaine of the internet. If you value your spare time away from the computer, you may not want to get involved with this! I of course mean that in the best way: merging galaxies is fun. There is something ultimately cool about letting billions of stars interact over vast scales of distance and time... and there is real science here. By creating a database of such events, scientists can use the data to look for trends. Are most collisions at certain angles? That might imply how the galaxies collide when they are in clusters, gigantic collections of thousands of galaxies. Are the mergers high speed, low speed? Are the victims wildly disparate mass galaxies, or usually two of roughly the same mass? What are the highest and lowest speeds of collision? All of this is important to know. The more basic info we get about collisions, the better we can understand them. For scientists studying collisions, it's almost hopeless to get enough simulations for this, but by crowd-sourcing it they get all that for free. The data from Galaxy Zoo indicate that people are quite good at classifying galaxies with only minimal training (done right there on the site in a couple of minutes), and we can hope the same is true for mergers; they'll run tests to make sure. So everyone wins here. Scientists get data they can use to understand the Universe, and the public has the knowledge that they are contributing to that understanding... and having fun all the time. Science! I love this stuff!