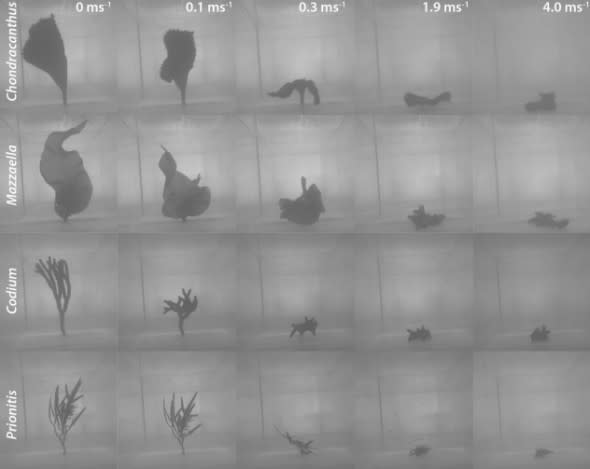 Littered with the dehydrating corpses of seaweeds, beaches after a big storm are a reminder that life can be tough out there in the crashing waves. But seaweeds aren't totally defenseless. A recent study

in the American Journal of Botany studied two different strategies that seaweeds use to reduce drag so that fast-moving waves don't uproot them. Drag is proportional to the total area of the seaweed multiplied by drag coefficient

, which depends on the seaweed's shape. (For example, a boxy school bus has a higher drag coefficient than a race car.) That means seaweeds can either get smaller or more streamlined to ride out the waves. Sea plants have adopted two main shapes---bladed

---to pursue these two strategies: Smoothly shaped bladed seaweeds crumple into smaller shapes when a wave hits them, while branched seaweeds fold their many (drag-generating) fronds into a more streamlined shape. The two approaches aren't mutually exclusive, but they do manipulate different physical characteristics. Seaweed's long, trial-and-error evolution has devised the same drag-reducing strategies that engineers have come up with.