Small, Round, and Slow: The Microbial Response to Energy Limitation 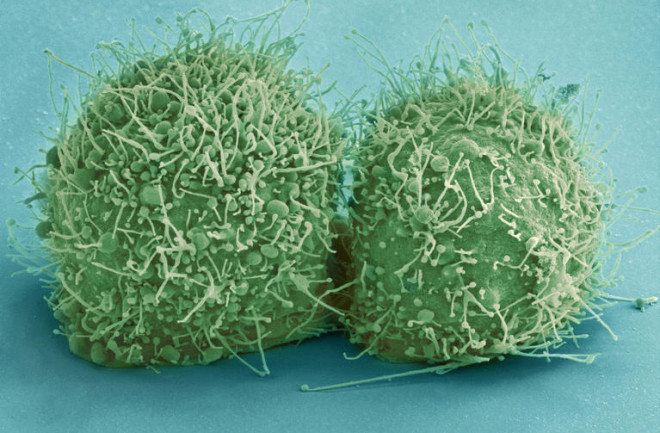 A scanning electron micrograph of recently divided cells. (Image: National Center for Microscopy and Imaging Research) It’s not easy being a microorganism out in the big wide world, given the constantly changing environmental conditions and an ever-present threat of predation. But perhaps the most pervasive challenge of all is energy limitation. Since life has seemingly spread to fill all available niches, most organisms likely live on the edge of energetic possibility, quickly pouncing on new food and modulating metabolic behavior during the lean times. In a wide-ranging review, Mark Lever and an all-star line-up of co-authors examined the traits of life under extreme energy limitation, a way of being that they argue “is the prevailing physiological state among microorganisms on Earth.” Studies of microbial behavior, morphology, and metabolism have traditionally used organisms in “exponential phase,” the best-case scenario of growth kinetics, when the cell’s every desire is met. These studies form the basis for much of modern microbiology, but things are different in the real world – the soil, marine, or subsurface environments where cells are struggling to get by. One of the first changes you’d notice when the going gets tough is a reconfiguration of the cell’s shape, as it downsizes (by up to half) and becomes more spherical. The decreased surface area-to-volume ratio minimizes diffusive and thermal losses, but also seems to admit a sort of defeat: with fewer membrane-bound chemical sensors out in the open, you’re hurting your chances of finding new food molecules. A similar strategy is seen when looking at cell movement. When cultures of Photobacterium angustum were starved for a day, the proportion of mobile cells plummeted from 60% to <5%. Pseudomonas strains moved about 95% less within just three hours of low-energy conditions. Apparently, the energetic benefit of swimming through such wastelands isn’t worth the cost of building and maintaining the sophisticated molecular structures required to do so. But this doesn’t always seem to be the case – in some environments marked by transient doses of energetic molecules, it’s go big or go home, and cells would be wise to keep the engine revved up. In these locations (which could include diffuse vents or seeps, intermittent streams, or animal guts), movement is essential and faster is better, despite the fact that the energetic cost increases with the square of the velocity. In a microfluidics experiment using the marine organism Pseudoalteromonas haloplanktis, researchers have shown a ten-fold gain in food exposure when flagella structures were retained. “Perhaps rapid chemotaxis is an adaptation to life in water columns,” Lever et al. write, “where substrate plumes vanish rapidly due to advective mixing, and rapid colonization of fresh detritus, fecal pellets, and exopolymers could confer a competitive advantage.” Observations of cell adhesion strategies are similarly schizophrenic. In most cases, microbes hold fast to the nearest surface under energy limitation, perhaps taking advantage of the tendency of all molecules – potential food included – to adsorb to solid surfaces. Microbes like E. coli and Shewanella oneidensis do this by modifying their membrane composition, increasing the proportion of hydrophobic molecules to squeeze up against mineral interfaces. On the other hand, distressed Klebsiella pneumoniae cells in sandstone aquifer conduits are known to bail on their neighbors. “Perhaps this strategy,” Lever et al. propose, “is comparable to the behavior of some water column cells to abandon particles, after depleting them of energy substrates, to find and colonize new patches.” The emerging proposition that a microbe’s response to energetic limitation is organism and environment dependent is somewhat unsatisfying for those seeking a universal biological rule, but some generalizable principles remain. While microbes in some environments explore drastic lifestyle changes when things are looking down, the trend is toward conservatism. Most cells go out with a whimper rather than a blaze of glory, laying off all non-essential personnel in hopes that the environment will ultimately provide.

Help us do science! I’ve teamed up with researcher Paige Brown Jarreau to create a survey of Extremo Files readers. By participating, you’ll be providing me valuable feedback AND contributing to real live science on blog readership. You will also get FREE science art from Paige’s Photography for participating, as well as a chance to win a $50 Amazon gift card (100 available) and other perks. It should only take 10-15 minutes to complete. You can find the survey here: http://bit.ly/mysciblogreaders