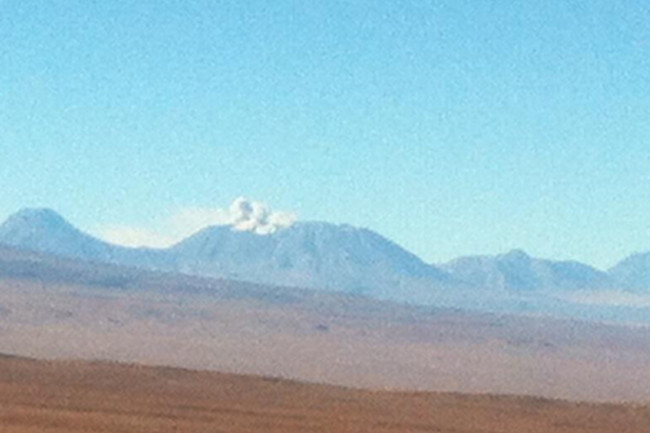 A small explosion seen at Chile's Láscar on April 3, 2013. Image: @cimadventure It has been awhile since we've heard of much activity in Chile. However, recent reports from the SERNAGEOMIN, along with people on the ground in Chile, seem to all suggest that activity might be on the uptick at Láscar. The SERNAGEOMIN/OVDAS report mentions an increase in steam and ash plumes from Láscar over the past week, with some plumes reaching as high as ~320 meters (~1000 feet). This is pretty puny when it comes to plumes, but the fact that some of the coloration of the plume suggests an ash component, it is worth noting. Combine that with an image taken April 3 by climbers in the area that shows a small explosion occurring at the summit (see above), and it does seem to suggest that the upper parts of the system are heating up. Now, the SERNAGEOMIN report mentions that seismicity has not significantly changed at Láscar during this increase in plumes and explosions, which might suggest that much of this activity is related to water seeping into the heated conduit rather than new magma near the surface. None of this activity has prompted Chile to change the status of Láscar, which still sits at Green. However, in all cases, Chilean geologists will be keeping a close on this activity -- you can too by checking out the Láscar webcams. Meanwhile, although things have mostly been quiet at Copahue since the surprise eruption in December 2012, the latest GVP Volcanic Activity Report mentioned some ash in recent steam plumes from the volcano as well. So, we might have two Chilean volcanoes that need watching. Copahue still sits at Yellow alert status due to this elevated steam/ash emissions and seimicity. {Special thanks to @aficientifico and @cimadventure for information and images in this post.}