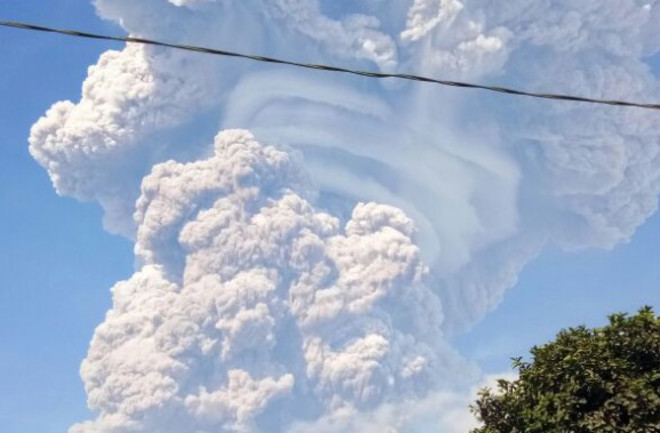 The massive ash column from the eruption of Sinabung on February 19, 2018. BNPB. Today, Indonesia's Sinabung had its biggest blast in its nearly 5 years of eruptions. I reported on the initial reports of the blast and now we have some pretty stunning images from space on the eruption. It really captures the power of the blast and how the ash spread mainly to the north over Sumatra (rather than the west as predicted). Sinabung appears to have settled down since the explosion, but with this change of character, volcanologists will be looking for signs if this change will be permanent. The Terra MODIS image (below) taken not long after the eruption shows the ash column towering over the local cloud deck. The oval lake with the island in the middle to the bottom right of the image is the Toba caldera. Even in this picture, the ash plume has spread to cover over 100 kilometers of Sumatra.

Terra/MODIS image of the Sinabung eruption on February 19, 2018. NASA. The Aqua MODIS image (below) taken about 3 hours after the Terra image shows the ash dispersing to the north. Here, the ash has spread for hundreds of kilometers across the island.

Aqua MODIS image of the Sinabung ash plume, taken on February 19, 2018. NASA. This weather satellite loop shows how the plume rising straight up until it begins to spread laterally, especially to the north.

Here are some more impressive land-based images of the eruption, along with ash covering the landscape near the volcano.

The clear, blue sky was quickly turned grey with ash. In this shot, you can see the pyroclastic flows generated by the eruption, possibly by the collapse of the ash column as the eruption waned.

Officials are handing out dust masks as breathing volcanic ash is a significant health hazard - the ash is really small shards of glass, so it can abrade your lungs and form a "cement".

This shot really shows how the ash cloud and pyroclastic flows can take up the entire horizon, even from a safe distance.

Even with the relative size of the eruption, there is no chance this causes any climate impact. The initial estimates of sulfur released are too low to cause much atmosphere effects and the height of the plume wasn't tall enough to reach the stratosphere. Current estimates of the ash plume are between 5-7 kilometers, so between 16,000-20,000 feet (down from the initial guesses of over 50,000 feet).