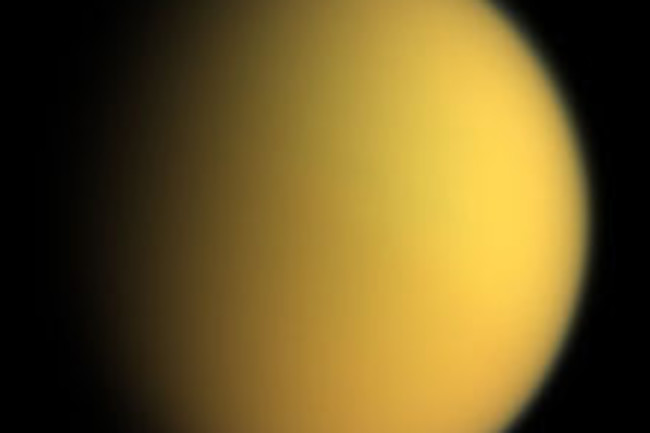 It's just a lab experiment, but University of Arizona researcher Sarah Horst says that her team's re-creation of the atmosphere on Saturn's moon Titan showed that atmospheric reactions could produce some of life's basic ingredients, and do it without the presence of liquid water. Titan, which is larger than Mercury, boasts a thick atmosphere of mostly nitrogen with dashes of methane, carbon monoxide, and other trace ingredients (At -290 degrees Fahrenheit, Titan is a tad too frigid for liquid water). Horst brewed up an approximation of that mixture. She and her colleagues then blasted it with radio-frequency radiation, a lab stand-in for ultraviolet radiation from the sun.

"The really important thing is that you have enough energy to break that [nitrogen] bond," she said. "We know there's enough energy to break those bonds on Titan." The experiment produced a slew of complicated molecules; the team has identified some 20,000 different kinds using mass spectrometry, Horst said. Included in this number are amino acids and nucleotide bases — the first time these molecules have been synthesized in an atmosphere simulation experiment without the use of liquid water, researchers said. [Space.com]

, the same conference that has been buzzing with other fascinating ideas

about Saturn and its lively satellites. And like other researchers hunting for life's building blocks on Titan, Enceladus

, or elsewhere, Horst's team contends that their work could tell us more about the emergence of life here on Earth.

The researchers said that because they achieved the reactions without the presence of liquid water, it's possible life could have sprung forth on Earth not in the seas, as commonly assumed, but perhaps in the planet's early atmosphere—a considerably thinner version of the fog enveloping Titan today. [ScienceNOW]

80beats: Weird Chemistry on Titan *Could* Be a Sign of Methane-Based Life