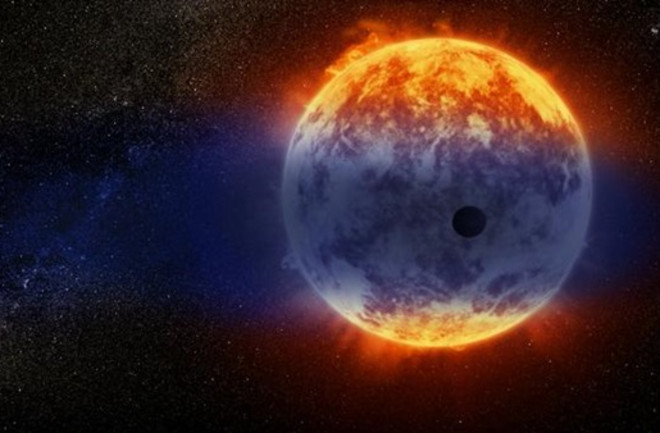 This artist's concept shows giant clouds of hydrogen (blue) evaporating from the Neptune-sized exoplanet GJ 3470b as energetic charged particles from its host star beat down on the planet. The hydrogen is escaping the planet about 100 times faster than seen for any other similar alien world. (Credit: NASA/ESA/D. Player (STScI))

Astronomers have discovered a bizarre, Neptune-sized exoplanet located less than 100 light-years from Earth that’s shedding its atmosphere so quickly it may help researchers finally answer the long-standing question: Where did all the hot Neptunes go?

According to the new research, published December 13 in the journal Astronomy and Astrophysics, the shrinking world, named GJ 3470b, is rapidly losing its atmosphere as it’s bombarded by a steady stream of energetic charged particles from its red dwarf host.

The discovery — made with the help of NASA’s indefatigable Hubble Space Telescope — suggests that although Neptune-sized exoplanets can exist temporarily very near their host stars, they may not last very long. Instead, these planets could lose a significant fraction of their mass through evaporation driven by intense stellar winds. In the case of GJ 3470b, the researchers think strong winds from its active host star have stripped the planet of up to about 35 percent of its original mass over the course of its life.

“This is the first time a planet has been observed to lose its atmosphere so quickly that it can impact its evolution,” said lead author Vincent Bourrier, an astronomer from the University of Geneva (UNIGE), in a press release.

An Oasis in the Desert

Based on our own solar system, astronomers typically break down planets into three broad categories: rocky terrestrial planets (like Earth and Mars), massive gas giants (like Jupiter and Saturn), and freezing ice giants (like Uranus and Neptune). But over the years, researchers have discovered a multitude of exoplanets around other stars that seem to break these familiar molds.

In particular, since the first confirmed exoplanet was discovered just a few decades ago, researchers have uncovered a surprising number of giant planets, dubbed hot Jupiters, located extremely close to their host stars. On the other end of the spectrum, astronomers have discovered a plethora of hot super-Earths, which are a few times the mass of the Earth, that sit very near their stars. However, astronomers very rarely find medium-sized planets (or hot Neptunes) in similar close-in orbits.

But why does this void of hot, mid-sized planets — the so-called “hot Neptune desert” — exist?

This graphic plots known exoplanets based on both their size and their distance from their host stars. Hot Jupiters are in the upper left, while super-Earths are in the lower left. As shown, very few mid-size planets, or hot Neptunes, have been found orbiting very near their host stars. (For reference, the solar system's innermost planet, Mercury, orbits the sun at an average distance of about 36 million miles.) (Credit: NASA/ESA/A. Feild (STScI))

This graphic plots known exoplanets based on both their size and their distance from their host stars. Hot Jupiters are in the upper left, while super-Earths are in the lower left. As shown, very few mid-size planets, or hot Neptunes, have been found orbiting very near their host stars. (For reference, the solar system’s innermost planet, Mercury, orbits the sun at an average distance of about 36 million miles.) (Credit: NASA/ESA/A. Feild (STScI))

“Until now, we were not sure of the role played by the evaporation of atmospheres in the formation of the desert,” said Bourrier. But based on this new finding, hot Neptunes may have withered away into mini-Neptunes (an alternative term for hefty super-Earths), or even eroded straight down to their rocky cores. “This could explain the abundance of hot super-Earths that have been discovered,” said co-author David Ehrenreich, an astronomer at UNIGE.

By showing that an active star can strip loads of mass from a mid-sized planet near the edge of the hot Neptune desert, the researchers think they’ve finally figured out why so few hot Neptunes have been discovered, while heaps of smaller planets, called super-Earths, have been found in the same boiling neighborhood.

“This is the smoking gun that planets can lose a significant fraction of their entire mass,” said co-author David Sing, a professor at Johns Hopkins University, in a statement. “GJ 3470b is losing more of its mass than any other planet we [have] seen so far; in only a few billion years from now, half of the planet may be gone.” And if GJ 3470b loses half its mass (it’s currently about 14 Earth masses), it will make the transition from hot Neptune to super-Earth.

GJ 3470b, which sits about 10 times closer to its host star than Mercury is to the sun, is not the first evaporating Neptune-sized planet ever found. In fact, just a few years ago, astronomers found a similar planet named GJ 436b that is losing its atmosphere just like GJ3470b, albeit at a much slower rate (about 100 times slower). To analyze the mass loss of both these planets, the researchers tracked the hydrogen that was escaping from their atmospheres.

However, astronomers cannot easily detect hydrogen from more than about 150 light-years away. This is because the hydrogen signals they are looking for fall in a wavelength range that is blocked by interstellar gas, which permeates the space between stars. But fortunately, the researchers have a plan to seek out more distant shrinking hot Neptunes in the future.

“Helium will expand the range of our surveys,” said Bourrier, “the high sensitivity of the James Webb Space Telescope should allow us to detect helium escaping small planets, such as mini-Neptunes, and complete our observations of the edge of the desert.”

So, for now, we’ll have to be satisfied with just a few known examples of shrinking hot Neptunes. But keep in mind, many more may lurk just beyond the horizon.