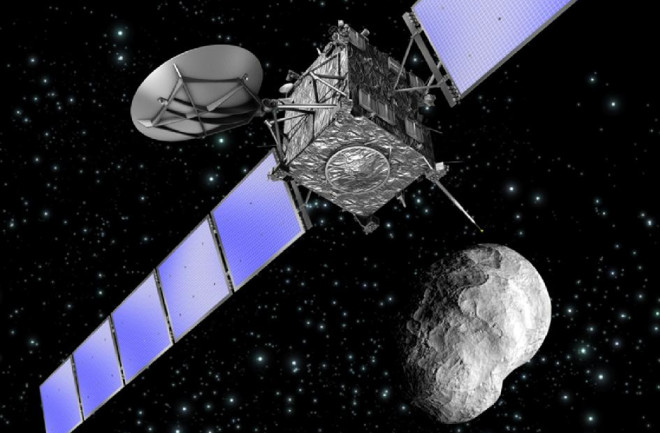 This artist's concept represents ESA's Rosetta spacecraft passing by an asteroid. Courtesy NASA In case you were asleep yesterday and missed the big news, the European Space Agency's (ESA) Rosetta spacecraft woke up from its 31-month hibernation. After the robotic equivalent of a drinking a black coffee — warming its navigation systems, pulling out of a spin, and pointing a radio dish toward Earth — Rosetta beamed a message to its home planet: Hello, world. NASA's Goldstone antenna in California picked up the transmission and sent it to a roomful of scientists, who engaged in some unprecedented fist-pumping at the news that their comet-chronicling craft was alive and well. Rosetta's Twitter account then said “hello” to the world in 23 different languages. Rosetta is on its way to Comet 67P/Churyumov-Gerasimenko, a 1.9 by 3.1-mile (3 by 5-kilometer) chunk of dust and ice that's headed toward the sun. When the spacecraft reaches its destination, it will begin to orbit the comet, spending two months scrutinizing the surface. This is a first: While astronomers have taken fly-by pictures, no one has ever tried to give a comet a satellite.

With Rosetta's zoomed-in observations of Comet 67P's gravity, shape and atmosphere, scientists will be able to find a safe place to send the orbiter's tenacious sibling: a lander named Philae. On November 11, 2014, Philae will eject itself, stretch out its three limbs, and become the first object to land on a comet. (The Deep Impact probe crashed into a comet on purpose, but scientists are hoping to be a bit more gentle this time.) Philae then will (gently?) fire a harpoon into 67P, anchoring it to the surface so it doesn't float away Gravity-style. After Philae literally digs into the comet, the orbiter will “escort” it on its trip around the sun. Both craft will send all of their field notes back to scientists on Earth, who will get an unprecedented look at one of the solar system's oldest members.

Comets are the leftovers of the solar system's formation and have remained largely unchanged for the past 4.6 billion years. Understanding what, exactly, comets are helps astronomers understand what the solar system was like in its earliest days, and how it has evolved to become a place that we can call home. But because these “dirty snowballs” (or “icy dirtballs,” depending on whom you ask) are so small and dormant until they get close to the sun, distance learning is difficult. Which is why ESA built Rosetta. Now Rosetta has successfully awoken (thanks not in small part to many spacefans who posted videos as part of ESA's “Wake up, Rosetta!” campaign) and is ready to show us what this comet is really made of. While we all wait for the reveal, though, here are seven things you might not know about the mission and its object of interest, to whet your curiosity: 1. ESA's website describes Rosetta as “a large aluminium box” (perhaps the most sophisticated box you've never met). Its 11 investigatory instruments live on top of that box, which — with about 63 square feet of room — is a little smaller than the average American bedroom. Its wings, each coated in a set of five solar panels, span 105 feet (32 meters) — almost as wide as a Boeing 727's wingspan. Rosetta seems to be making better use of its space than both your house and the airline industry. 2.The orbiter boasts 24 different thrusters to control its motion and orientation. Each applies 10 Newtons of force, or about the muscle required for you to hold up a 2.2-pound (1 kilogram) bag of flour. It doesn't sound like much, but take a moment to remember the action scenes in Gravity, and (spoiler alert!) how little it took for George Clooney to launch himself into space forever. 3. An instrument called C

The lander, on the comet's other side, will pick up the signal and send it back to Rosetta. From the way the radio waves have changed, astronomers can learn about the geometry and electrical properties of whatever lurks inside the comet. Which seems like an invasion of privacy, but it's in the name of science. 4. Comet 67P/Churyumov-Gerasimenko was found by accident on September 11, 1969, when astronomer Klim Ivanovych Churyumov was looking at an image of the already-known Comet 32P/Comas Solá. 5. The Hubble Space Telescope took 61 glamour shots of Comet 67P in 2003, giving scientists enough data to make a 3-D model of the comet and plan the details of the Rosetta mission. Because Hubble just can't let another space mission have its day in the spotlight. 6.Comet 67P has had two close encounters with Jupiter — one in 1840 and one in 1959. The giant planet's gravity changed the comet's orbit both times, sending it hurtling closer to the sun on its trips to the inner solar system. These interactions, while potentially traumatic for 67P, are the reason we on Earth can detect the comet at all. 7. Rosetta is poised to do some dirty work. When Comet 67P gets close to the sun, it will let loose twice as much dust as gas. Which makes it a good thing that Rosetta's important bits are on the faraway side. Both the dust's and the gas's compositions — whatever Rosetta finds them to be — will shed light on the solar system's earliest ingredients. Now that's a goal worth getting grimy for.