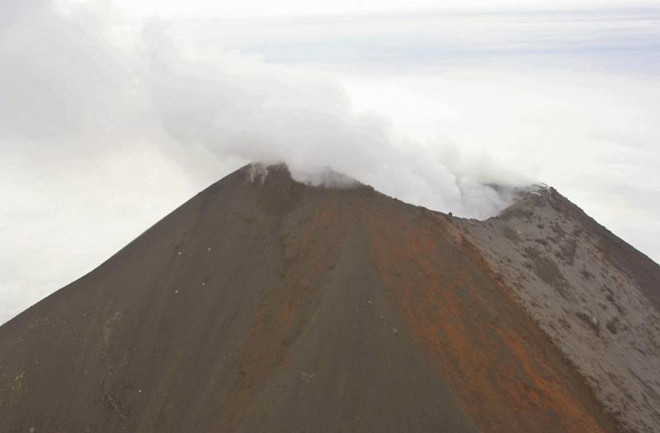 The summit of Cleveland in Alaska seen in August 2008. Cleveland is one of the more active volcanoes in the Aleutians, however, no monitoring equipment is currently installed on the island due to the cost of installing and maintaining such equipment. Image: Chad Hults - AVO/USGS. Right now, 5 fewer volcanoes have any active volcano monitoring along the vast Aleutian arc. That might seem insignificant to many people -- I mean, what harm do five volcanoes in the northern Pacific pose? -- but really, it is symptomatic of a greater issue with volcano (and science) research across the globe today. We might not be facing a volcanic crisis today in the United States, but with fewer volcanoes being watched in real time and few funds to expand some of the active but sparsely monitored volcanoes that are right in our backyard. The budget reductions in the United States have hit important volcano monitoring institutions like the Alaska Volcano Observatory hard. The budget for AVO has fallen to half of its peak funding, down to ~$4 million per year to monitoring the 52 active volcanoes of the state of Alaska (this doesn't even include the cooperative work AVO does with KVERT to monitoring the volcanoes of Kamchatka.) Do the math, and that is a paltry $76,923 per volcano. The cost to replace or install a single seismometer would eat a significant portion of that money ... and that isn't even counting the salaries for the people who are needed to then maintain and interpret the seismic information coming from the instruments. These volcanoes not only threaten the people of Alaska, but also those all-important trans-Pacific air routes to Asia from North America. Ash is a major danger for jet aircraft, so flying unbeknownst into a volcanic cloud can be extremely treacherous and potentially deadly. Extend this to some of the volcanoes in the lower 48 states, where many times little-to-no monitoring equipment installed directly on the volcano (except for the famous ones like Yellowstone, St. Helens and Rainier), and we're left with a volcano monitoring network that has holes that could prove to be costly, both in terms of lives and money. However, the biggest issue here, in my mind, is the fact that so many people just don't see vital, pure research in volcanoes as important. Sure, I have a vested interest in this as an active volcano scientist, but what do we make of announcements like Canada's National Research Council (NRC), where future research must have a commercial application? Understanding how magma's evolve and accumulate under a volcano does not have an immediate commercial application, yet is something we need to know if we are ever going to have a chance to develop predictive models for volcanic eruptions. Even more than this, it smacks at the core of what it means to do science -- curiosity. No longer is it okay for gaining knowledge through pure research, but instead it must be something that can make money. This limitation is stunningly shortsighted. Not only does it imply that research needs to put in the monetary context of the current market, but also it suggests that exploration is not worth the effort or cost. Without pushing boundaries, science and knowledge cannot move forward and trust me, making science beholden to commercial interest will not accomplish this. Sure, you can say "its my tax money, why should I fund [fill in research]." Let me ask you this: can you assess, merely on the soundbites or even brief synopses on research agency websites, what the applicability and soundness of the research might be? I know I can't, but that is why we have a peer review system that can assess research and its potential outcomes. In the United States, the National Science Foundation budget is a drop in the federal bucket (~0.02% of the total 2012 budget - ~$7 billion), yet for some reason makes an easy target for those budget hawks who are looking for fat to cut. Science is now considered fat that is unnecessary for government spending. I'm not going to play the game of what the NSF budget translates to in terms of the cost of other programs or pieces of military equipment, but all of the important, pure science research funded by the NSF amounts to ~$22 per year for each US citizen. How many of you spend more on donuts per month than what it takes to fund science? Our options are limited in how to fund pure science or volcano monitoring. Do we become beholden to commercial interest by requiring private funding for science -- and if you can't get funding from a company than your research is "unworthy"? Do we turn scientists into internet buskers, asking for money to do their work through Kickstarter campaigns? Even my research, which is limited by the nature of my job at a small liberals arts college*, costs a significant amount of money per year to pay for student stipends, lab time, supplies, travel, field work and more. For my colleagues at research-oriented institution, where research productivity is vital for job security, the cost is much higher. By cutting government funding of research or forcing the commercialization of science research, we're saying that science for discovery is no longer viable or useful. Is this something you want to teach your children or grandchildren, that science can only be done if it will make someone money? Or do we want to say "no" to this trend that "business is boss" across our society and make the stand that science research is the core to discovery in the United States and across the globe. * I love being at a liberal arts college, don't get me wrong. The scope of research I do is limited by the time I need to dedicate to teaching and the fact that my university is only undergraduate students.