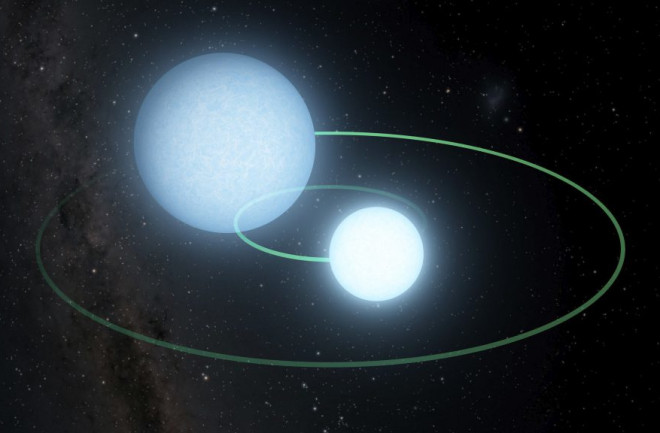 The two white dwarf stars orbit so close together that the whole system could fit inside the planet Saturn. (Credit: Caltech/IPAC)

Astronomers using the Zwicky Transient Facility at Kitt Peak in Arizona have discovered the second fastest orbiting pair of white dwarfs. At the end of their normal lives, our sun and other stars like it become white dwarfs. Their outer layers puff away and leave behind a hot, dense core. And if those stars started life in a binary pair, as most stars do, then then they can end up in a tight, fast orbit, as the stars age and interact.

But in the extreme world of binary white dwarfs, this new discovery, called ZTF J1539+5027, is an extreme case. The two tiny stars orbit each other every 6.91 minutes, within a space smaller than the planet Saturn. Researchers led by graduate student Kevin Burdge from the California Institute of Technology published their findings in the journal Nature on Wednesday. They point out that the system will be a perfect target for the upcoming LISA gravitational wave detector, set to launch in 2034.

In their younger days, these stars probably orbited much farther apart. But identical twin stars are rare, and one usually starts off at least a little bigger than the other. This bigger sun then races through its life a little quicker. That means that one star reaches its large and puffy phase while the other is still star-like, and they can end up sharing – or stealing – material from each other. In many cases, this trade-off forces the pair to spiral closer together.

In this newly-found system, one of the stars is currently slightly larger than Earth but weighs about 60 percent the mass of our sun. The other dwarf is puffier and a little larger in diameter but weighs only one-third of its companion. Already quite close, the two stars grow 10 inches closer per day, thanks to the energy they radiate away as gravitational waves.

Such systems with clear gravitational wave emissions are expected to be common in the universe, but only a few have been positively identified so far. That may change when LISA, the Laser Interferometer Space Antenna, launches in the 2030s. Like LIGO, which found colliding black holes in 2015, the instrument will hunt for the invisible ripples in space-time caused by gravitational waves. But LISA will hunt smaller prey, like these binary systems. And unlike many of LIGO’s sources, which can only be observed through gravitational waves, binary pairs like J1539 may yield extra information, appearing both through gravitational waves and visible light.

While LISA isn’t ready for launch yet, scientists are excited to have a prime observing target already picked out, and know that LISA’s prey is out there, waiting to be observed.

[Editor’s Note: An earlier version of this story contained an error. The duo ranks as the second-fastest known pair of orbiting white dwarfs.]