Search For The 'Dark World': Scientists Use LHC to Hunt Dark Matter Siblings 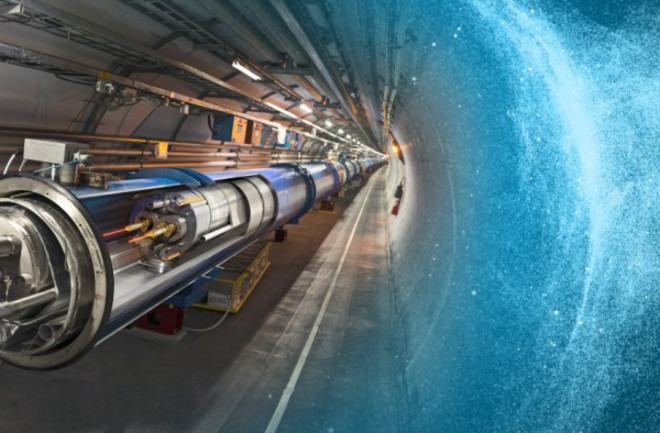 The Large Hadron Collider might reveal dark matter's less secretive sibling particles. (Credit: Daniel Dominguez and Maximilien Brice/CERN) Dark matter has long frustrated researchers. It seems to make up most of our universe, yet it barely interacts with that universe. And despite a plethora of active experiments hunting for dark matter, so far they’ve all turned up empty. That has some researchers turning to the next best thing: other dark particles. Our world of normal matter has lots of different particles, so perhaps there’s a whole dark world of particles as well. To be clear, no one’s found these either, and there’s even less proof for their existence. But it's an idea scientists intend to probe when the Large Hadron Collider turns back on 2021. Instead of looking for dark matter itself, they'll be hunting its potentially less elusive sibling particles.

All the particles scientists know about currently belong to the so-called Standard Model. These include particles like electrons and photons, as well as stranger bits like quarks that make up more familiar protons and neutrons. It’s not just a stampbook of things particle physicists have found over the years, either. There are well-understood forces – electromagnetism, gravity, and the strong and weak forces – that allow these particles to interact.

Read more: Everything Worth Knowing About The Standard Model

However, dark matter is not part of the Standard Model, and not just because it’s new. It’s because it doesn’t interact except through gravity. We can’t detect dark matter at all through any of the other forces, and that sets it apart from the other stuff of our universe. In fact, a number of scientists think dark matter could be just one part of an entirely separate “hidden sector” of particles that have their own forces and interactions. If the Standard Model represents all the creatures who live on land, then perhaps dark matter is simply the first sea creature we’ve observed, poking its head out of the water.

Siblings tattle on each other

And if there is a whole world of dark particles, it could be that some of them are easier to find than dark matter itself. LianTao Wang, a physicist at the University of Chicago, thinks that the LHC might be able to uncover some of these dark particles. He and his colleagues published a paper explaining how on April 3 in Physical Review Letters

. The LHC’s job is to slam particles together at high energies, creating an environment reminiscent of the powerful first few minutes after the Big Bang, when the universe was a roiling mass of particles, many of which live for just the smallest fraction of a second. Lang predicts that some of the particles produced in such a collision might come from this dark world, and a few in particular might decay more slowly, taking a whole nanosecond to disappear. “It's really hard to detect dark matter directly, but it’s more plausible to have access to their brothers and sisters that decay into dark matter and standard particles that we can detect,” says Zhen Liu, a co-author on the paper. “This is a more practical probe into the dark world.” “We do need to do quite a bit of work,” Wang says. “LHC is only sensitive to the things you're looking for. You throw away most of the events.” Even now, with LHC saving data only from “interesting” collisions, it still collects more than a petabyte of information each year, comparable to the output of Facebook or Google. And scientists had to tell LHC what counts as interesting. While it’s possible that some dark particle events might be buried in old data, waiting to be exhumed, the key to the new research will be to overhaul LHC’s definition of what counts as an interesting event, so they don’t lose any precious data pertaining to the dark particles. Luckily, Wang and his colleagues have time. The LHC turns back on in 2021, and will run for a few years. They don’t expect their dark particles to be commonplace, creating perhaps a few in a decade. But the LHC will run for years, creating trillions of particle collisions. And perhaps one of them will be a messenger from the dark world.