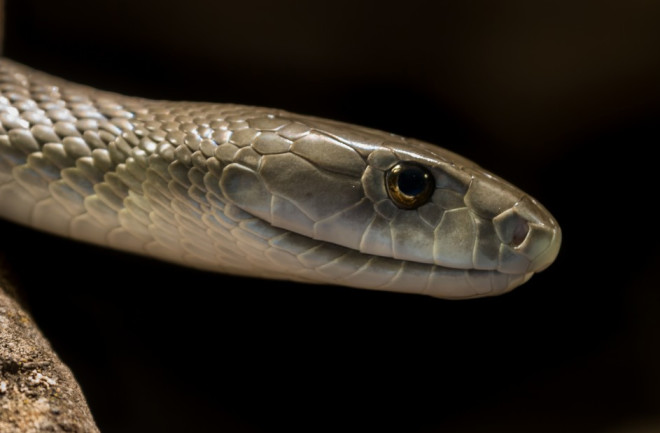 A black mamba's sinister smile. Photo by James Arup As a species, there is perhaps no topic that fascinates us more than mortality, especially our own. So unsurprisingly, there's no shortage of science fiction based on the idea of scientifically circumventing our mortal coils, most of which seems rather fantastical. But bringing the dead back to life isn't as impossible as it might appear. While we're still a long ways away from Dr. Frankenstein, recent developments in understanding how proteins and genes evolve has allowed scientists to raise dead proteins from the grave. In a new paper in Scientific Reports, a team of French scientists uses this cutting edge tech to resurrect extinct three-finger venom toxins and compare how they work to modern forms. Three-finger toxins—peptide (small protein) toxins named for how they resemble hands with three digits when folded—are a large family of venom toxins responsible for pernicious physiological effects, including giving mambas their notoriously swift and deadly venoms. This family of proteins can do many different things inside the body, but one of the most medically relevant is how they interact with what are called aminergic receptors (special proteins in cell membranes that help cells communicate by binding signaling molecules like serotonin). These receptors are essential in neuronal signaling, allowing the animals that wield these toxins to rapidly shut down muscle movement to capture prey.

Erabutoxin, an example of a snake venom three-finger toxin, with each "finger" numbered. Image c/o Wikimedia Commons The signal-stopping actions of these venom toxins aren't just useful to the animals that create them. It turns out being able to selectively shut down nerves is quite helpful in medicine—so helpful that about a quarter of pharmaceuticals currently on the market target these essential aminergic receptors. But the trouble with many of these drugs (including opioid painkillers) is that they're not selective enough. They turn on or off many different kinds of receptors at once. After decades of tinkering with the structures of current compounds, scientists have started turning to nature for inspiration, hoping to find variants with ideal properties to become the next blockbuster drug. While mamba venom toxins already have medical potential, the variations that exist now represent merely a snapshot in time in the long evolutionary history of these compounds. "It is possible that toxins with interesting activities on the bioaminergic receptor family might have existed in the past," explain the authors. That means the key to the next wonder drug may be hidden in the venoms from snakes that slithered the earth hundreds of thousands or millions of years ago, if only we could study them. Since inventing a time machine to travel back and milk ancient snakes was too onerous a research plan, the scientists did the next best thing: they simulated de-evolution, or as they put it, "accepted the challenge of resurrecting ancestral proteins" from mamba venoms. Using models of protein evolution, the team artificially turned back the clock, undoing changes that likely occurred to the toxin sequences in more recent time to create six toxin variants ancestral to one or more of ten current mamba three-finger toxins. They then synthesized these toxins and evaluated their performance in a battery of activity tests.

An evolutionary tree of the current toxins (in black) and the reconstructed ancestral toxins (in red). Part of Figure 2 from Blanchet et al. 2017 By studying these undead toxins, the scientists were able to hone in on key portions of the peptide that alter how it binds to different types of aminergic receptors. They then used that information to tweak the ancestral toxins for increased selectivity and affinity. In the process, they made toxins with unique activity profiles. AncTx1, the first ancestral toxin, is now the most selective peptide known for α1A-adrenoceptors, and AncTx5 is now the most potent inhibitor of the three α2 adrenoceptor subtypes. Whether these actions will prove useful in research or medicine has yet to be seen, but the fact that they were able to create new proteins with uniquely potent activities in a targeted way is sufficient proof-of-concept. Other protein engineering methods lead to the generation of hundreds or thousands of potential compounds, most of which are effectively useless. "The advantages over other protein engineering strategies are clear," the authors conclude: "a smaller number of variants with more diverse activity profiles." The same approach could be taken with other venom toxins, potentially discovering a myriad of promising pharmaceuticals.