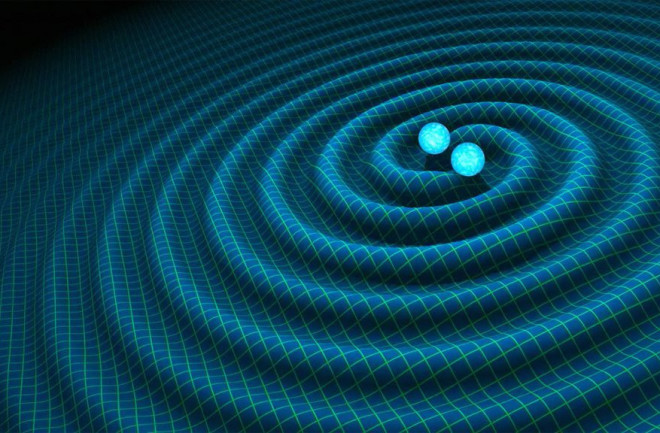 Gravitational waves can be detected from the collision of massive objects in the universe, but also from much smaller objects like dark matter particles. (Credit: EPA/R. Hurt/Caltech-JPL)

In 2015, scientists made history by detecting the first gravitational waves — ripples in space-time predicted by Albert Einstein a century earlier. The waves were created by the merger of two black holes, each one much larger than the sun. And since then, the Laser Interferometer Gravitational-Wave Observatory (LIGO) has found at least 10 more such signals. Most of those were from black holes, and one was spawned by the merger of neutron stars, the dense stellar corpses of stars much larger than our sun.

To find these exotic events, scientists had to build enormous L-shaped structures, with each arm of the detector stretching two and a half miles. The enormous size is necessary to find the deep boom of gravitational waves from large sources like black hole and neutron star mergers. These signals have wavelengths that can stretch hundreds and even thousands of miles.

But there are gravitational waves made by much smaller events, like tiny primordial black holes from the beginning of the universe, black holes the size of our sun, and even hypothetical dark matter candidate particles called axions.

In a project announced this week, scientists say they’re working on a way to find these smaller events. And it might only take a detector with arms just three feet long, small enough to fit on a standard lab table. The project, being built by scientists at Northwestern University, is called a Levitated Sensor Detector (LSD), and it would open whole new windows on the world of gravitational waves.

The first project will be a prototype. In shape, it resembles the larger LIGO detectors in Washington and Louisiana. But instead of stretching miles, it will be only a few feet in each direction, making it thousands of times smaller. And instead of bouncing lasers back and forth along these arms, as with LIGO, LSD would track particles kept floating within its arms due to radiation pressure. When gravitational waves disturb those particles, LSD will know a gravitational wave event has occurred.

“If you think of gravitational waves like sound waves, the frequency we are trying to capture with levitated sensors is sort of like a dog whistle,” said Vicky Kalogera, a co-investigator on the LSD project, in a press release.

Each gravitational wave detector has its own range, just like astronomers need different telescopes to study objects that emit radio waves, visible light, or x-rays. So LIGO and its Italian partner, VIRGO, track events like large black hole mergers. Meanwhile, the European Space Agency is working on the Laser Interferometer Space Antenna (LISA) which will, as the name implies, reside in space, with multiple detectors flying in formation. LISA will be attuned to such events as even larger supermassive black holes swallowing stars, or the whirl of two dense objects like black holes or neutron stars orbiting each other.

LSD is filling in the other end of the spectrum, with the smallest, highest-frequency events.

LSD is funded for $1 million dollars by the Keck Foundation. Scientists plan to spend two years building the prototype, and then operate it for one year before sharing their results. While scientists don’t know how often LSD would be able to find axions, for instance, whose existence isn’t yet proven, they do know that stellar mass black holes exist. The success of LIGO has proven that while gravitational waves may be difficult to detect, once the technology is in place, the signals are there in plenty, simply waiting to be found.