Labs don't yet exist, but the technology has come a long way. 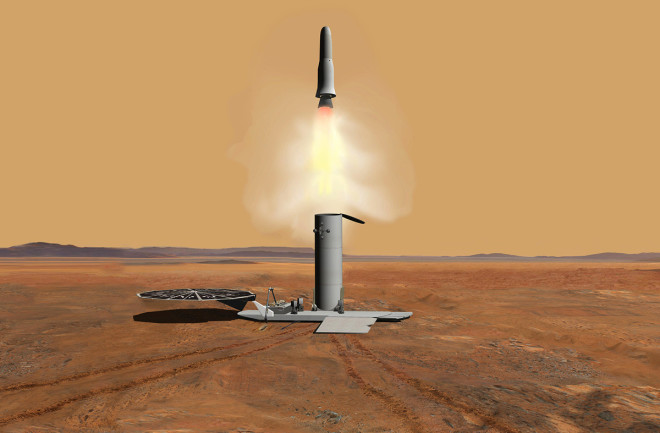 An artist's concept of a proposed Mars sample return mission shows an ascent vehicle launching. The vehicle would release a container of rock samples into Martian orbit for collection via spacecraft. | NASA/JPL-Caltech

Discover reported 12 years ago that Earthlings weren’t yet ready to receive and study samples of Martian rock or soil that might contain alien life-forms. (“Are We Ready for Alien Organisms?” March 2003.) At the time, researchers didn’t know the best way to combine biological containment and clean-room technology in a way that would allow them to examine samples safely without contaminating them.

The bad news is such labs still aren’t ready, says Carlton Allen, a NASA astromaterials curator. The good news: Space agencies have made notable advances toward helping the world prepare.

NASA’s facility designs still largely resemble labs in which researchers study Earth’s most lethal pathogens. Pressurized areas restrict organisms’ movement, while anything coming in or going out of the lab is sterilized. NASA relies heavily on heat sterilization, but techniques are always improving. In particular, the agency has approved the use of vaporized hydrogen peroxide to sterilize equipment, a technique that helps decontaminate medical labs and instruments and could be applied in sample receiving facilities. The vapor is effective against a wide range of microorganisms, sterilizes quickly and, unlike dry heat sterilization, won’t damage most touchy electronics.

NASA also is considering removing people from the lab entirely, replacing them with remotely controlled robots. “We asked a company to come up with an all-robot design to understand if we can take humans out of direct contact completely,” Allen says. It turns out they can. Once NASA finalizes plans for a Mars sample-return mission, the agency plans to update that design, incorporating any new advances in robotic technology.

Across the pond, the European Space Agency (ESA) is focusing on improving double-walled isolators — stainless-steel containment units with two chambers of different pressures — that would house samples during hands-on research. According to Allen, the ESA is testing new methods of sealing instrument entry points, one of the main places where leaks can occur.

The push for innovation isn’t over yet. The Mars 2020 lander could likely collect core samples from the Red Planet, the first step in returning them to Earth. And that’s a key motivator for space agencies, Allen says: “We have gone through cycles of Mars sample return being close, and each time that has spurred a new set of technology and design studies. Now, that’s beginning to happen again.” Readiness could be right around the corner.

[This article originally appeared in print as "Bring Home the Goods."]