Scientists Narrow in on Landing Site for NASA's Next Mars Rover 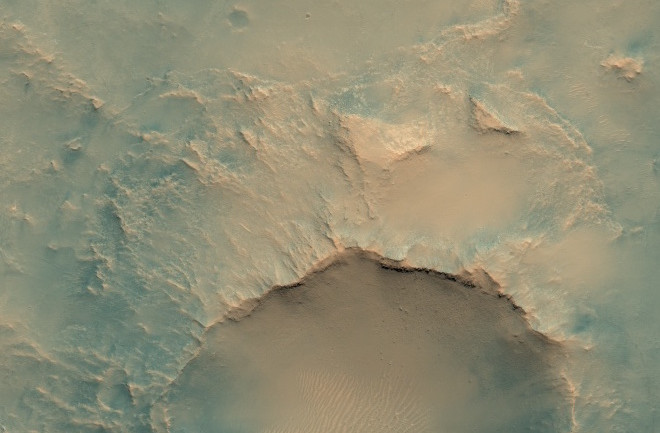 A crater at Northeast Syrtis, one of the shortlisted landing sites for the Mars 2020 rover. (Image: NASA/HiRISE/University of Arizona) The Curiosity Mars rover is in the prime of its robotic life, approaching dramatic layered deposits on the slopes of Mt. Sharp. But even as the four and a half year-old mission reaches the features it was initially sent to investigate, scientists and engineers are feverishly planning for the next rover mission, Mars 2020. 2020 is shaping up to be a busy year on the Mars exploration calendar: in addition to the NASA rover, the European Space Agency and China have missions slotted for the favorable launch window. But where to go? Making the decision is a complex process, as teams of scientists and engineers develop navigational software, optimize the payload, and establish the geologic context of potential landing sites. The importance of site selection is magnified by the role of Mars 2020 as the first step in a sample return mission – a longtime grail of Mars scientists. In its current configuration, the rover can collect about 30 canisters of soil, air, or rock particles. A future, planned-but-not-yet-officially-on-the-books mission will return the cache to Earth, where a robust analytical arsenal will be waiting to conduct a battery of detailed tests. For many scientists, one shift from previous missions is a tighter focus on investigating rocks that preserve signals from Mars’ active past – a period between about three and four billion years ago during which liquid water flowed across the surface, altered rocks, and may have created habitats for opportunistic organisms. And because the rover can only collect samples at the planet’s surface, researchers are avoiding places where more recent forces like craters or windswept sand have covered the ancient rocks. At a meeting last week in Monrovia, California, hundreds of Mars scientists and mission engineers gathered to narrow the list of landing sites from eight to three. The selection process has been in full swing since 2014, and the final decision will be made in the next year or two, as the instrument teams finalize their flight-ready hardware and prepare for launch. The workshop was a civil yet high-stakes environment, as proponents of the eight sites had a few hours each to make their case. Ken Farley, a professor of geochemistry at the California Institute of Technology, serves as the mission’s Project Scientist. “It’s hard to imagine any decisions on this mission that will be as impactful to the overall mission as selecting the landing site,” he told the attendees. “For decades to come, the decision we make will be important – it will drive a lot of science that gets done.” In other words, no pressure. After two days of presentations and debate, participants were polled on the sites, asked to consider the three main criteria: 1) Could the samples, if returned to Earth, lead to fundamental discoveries about Mars and the potential for extraterrestrial life? 2) Can the site be investigated over the course of the primary mission (roughly three Earth years)? 3) Are there significant water resources that may be advantageous for future, human-based exploration? (The water issue is a double-edged sword, as the mission is also being steered away from water resources that are too active. A mandate of the planetary protection office is to avoid cross-contamination of Earth and Mars, so any habitats that could support hitchhiking terrestrial microbes need to be avoided. Sites with water ice within five meters of the surface are not being considered.) And the winners – drumroll please – were, in some sort of preferential order, Jezero Crater, Northeast Syrtis, and the Columbia Hills. Jezero is an ancient lake – life may have taken hold in its waters, and the inflow of sediments from a wider watershed could concentrate compelling material. NE Syrtis maintains mineralogical signatures from water-rock interactions that could be similar to those powering rock-hosted life on Earth. The Columbia Hills site – which has been investigated by the Spirit rover – possesses an ancient hydrothermal spring. The idea of re-visiting a site with Mars 2020’s more powerful set of tools – at the expense of a geologically distinct portion of the planet – is a subject of heated debate. In the coming weeks, the Extremo Files will profile each of the three sites still in the running. Astrobiology’s next great hope for transformative discovery may well hang in the balance.