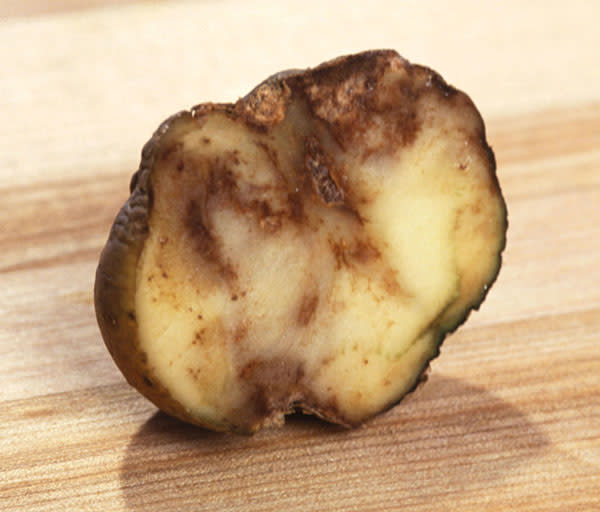 Playing out like a mash-up of Cold Case and CSI:Botanical Gardens, scientists have identified the guilty party—and exonerated previous suspects—in a mass murder. Of potatoes. A single strain of the fungus-like Phytophthora infestans caused the potato blight that killed roughly a million people during Ireland’s Great Famine in the mid-19th century. A study published today in eLife has proven for the first time, however, which of the many varieties of P. infestans is the culprit, and found that it is distinct from modern strains of potato blight. As recently as the 1970s, populations of P. infestans outside its native homes of South America and Mexico were dominated by US-1. Because of its prevalence, US-1 was long considered likely to be a direct descendent of the blight responsible for Ireland’s Great Famine. Research earlier this decade, however, used samples from historical collections to reveal that the infamous blight strain had a mitochondrial genome that didn't match up with present-day pathogens. In the newest study, researchers used high-throughput sequencing to compare the genomes of 15 modern strains of P. infestans with 11 historical samples kept in botanical garden and museum archives. Their analysis revealed that a new strain, dubbed HERB-1, was the cause of the epidemic. While HERB-1 is distinct from all modern strains, including US-1, is so closely related to the latter that both likely emerged from a common ancestor in Mexico. The researchers theorize that, around 1842, a single line of P. infestans traveled north from the blight’s native Mexico. In its new home somewhere in the U.S. or Canada, both US-1 and HERB-1 emerged. HERB-1 then crossed the Atlantic to Europe and ultimately Ireland, persisting for about 50 years. Although the Spanish brought the potato from South America to Europe in the 16th century, European crops remained blight-free until 1845, when P. infestans showed up in Belgium and quickly spread through Europe and Great Britain. The population of Ireland relied more on the potato than other regions, and the blight’s arrival on the island had catastrophic consequences. Crop failures led to famine, which killed about a million people and forced a million more to leave the country. Researchers theorize that HERB-1 went extinct with the onset of resistance gene breeding in the early years of the 20th century, when the HERB-1 resistant wild species of potato, Solanum demissum, was interbred with the cultivated variety, S. tuberosum. Around the same time US-1 began to spread globally, eventually replacing HERB-1 as the primary strain outside of Mexico and South America. Modern strains of P. infestans remain a scourge to potato crops around the world: according to the study, current annual losses of potatoes to blight could feed at least 80 million people. By using well-preserved historic samples from herbarium collections, the study’s authors suggest additional DNA analysis could provide even more clarity about the causes—and possible preventions—of blight epidemics. Image courtesy USDA

Hovering, Flying, and Hopping Across the Solar Sytem

Can You Get COVID-19 Twice? Scientists Say It’s Too Early to Tell