A new study shows that being in a binary star system can keep a massive star spinning fast enough to produce such powerful explosions. 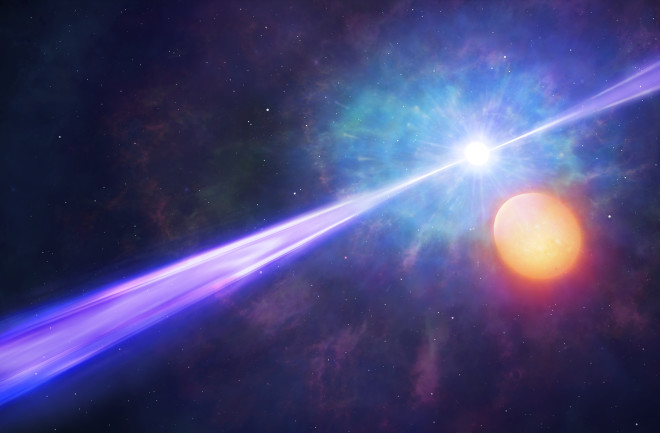 The bright beams of light dubbed gamma-ray bursts may originate in binary star systems, as shown in this illustration. (Credit: University of Warwick/Mark Garlick)

Throughout the universe, bright explosions that astronomers call gamma-ray bursts blaze through space. These gamma-ray bursts are the brightest explosions known — a typical gamma-ray burst can produce as much energy in the seconds or minutes of its explosion than the sun produces in its entire lifetime. But despite their ferocious intensity, scientists still don't know exactly what causes gamma ray bursts.

Astronomers generally think that one type of gamma-ray burst, called long-duration gamma-ray bursts, come from very massive, fast-spinning stars. Now, a team of researchers has shown that stars like these in a binary system, in orbit with a companion star, are likely what produce these explosions.

The researchers presented their findings in a recent paper in the Monthly Notices of the Royal Astronomical Society.

It’s unlikely many single massive stars that start off spinning fast would stay that way at the ends of their lives, according to Ashley Chrimes, an astronomer at the University of Warwick and the lead author of the new paper. Massive stars tend to blow off a lot of material over time, which slows their spinning, like ice skaters throwing out their arms mid-spin.

That means it would be difficult to explain why all the long-duration gamma-ray bursts astronomers see — roughly one per day — occur with single stars. But if a massive, fast-spinning star had a companion, gravitational interactions within this binary system might be able to keep the star spinning fast — and producing these powerful bursts.

To test the idea, Chrimes and the other paper authors ran a series of computer simulations of binary star systems with various properties and conditions. They found that being in a binary system could indeed help a massive, fast-spinning star keep spinning fast.

And the systems with stars that spun fast enough to create such energetic explosions are probably common enough that binary star systems could account for all the long-duration gamma-ray explosions astronomers see.

The Holy Grail of Gamma-Ray Bursts

Based on their findings, it’s quite likely that binary systems are the source of long-duration gamma-ray bursts, Chrimes said.

If we wanted to be completely sure, the best evidence would be to look at a gamma-ray burst in a nearby galaxy — nearby enough that astronomers already have good images of it pre-explosion — and see if they can spot a companion star left over after the explosion, Chrimes said. Unfortunately, the chances of seeing a gamma-ray burst go off so close by aren’t very high.

“That would be like the Holy Grail,” Chrimes said.