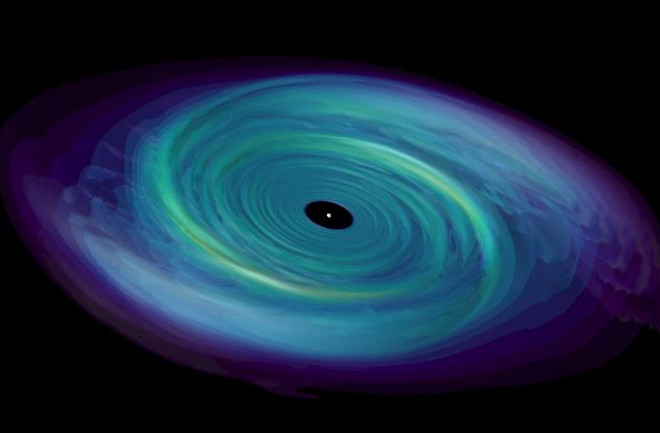 Stars, planets, and black holes all grow by consuming material from the center of a spinning disk. Researchers assumed they knew how material fell into the center, but hadn’t tested the theory until now. (Credit: Michael Owen and John Blondin, NCSU)

Planets, stars, and black holes all grow by consuming material from a spinning disk. While these disks may differ in size, they’re all mostly dependent on the mighty force of gravity, which keeps them spinning around the central mass. Gravity lets small clumps grow into bigger clumps. But it’s not enough to pull the whole disk into the middle in one giant clump, because angular momentum is pulling those clumps away from the center as they spin.

That’s a good thing, because it means that the universe is composed of more than just large, lonely clumps of matter — it’s also why the Earth spins around the sun instead of falling in and burning up. But that kind of central accumulation sometimes happens nonetheless, which is why we see things like planets, stars, and active black holes in the universe around us. Something seemed to be missing from the basic angular momentum vs. gravity theory.

Researchers have had an idea for a while now, but no one had ever tested it until now. The key is that these spinning disks of material also carry an electric charge. And since they’re in motion, that means they’re generating a magnetic field. The turbulent motion of many small objects in that magnetic field leads to instabilities, and the objects begin trading angular momentum: some lose it and fall closer into the center, while others gain it and slide farther out.

Researchers at Princeton’s Plasma Physics Laboratory came up with a way to test this basic principle, called magnetorotational instability, or MRI . They published their results January 14 in the journal Communications Physics. Eric Blackman, a co-author on the paper, said the inspiration for their experiment was based on how most textbooks teach the phenomenon of MRI.

People have assumed for a long time that MRI will make disks of material spread out, pushing close material closer to the center, where it can fall into a central star or black hole, and outer material farther away.

Looking for evidence of MRI in space is tricky. Researchers can see the results of material piling into the center of a system – a star is born, or a black hole shoots out active jets. But measuring the flow of material accurately enough to test MRI is beyond our current abilities.

In labs, the closest analog to a giant spinning disk of charged plasma and dust would be a swirling tank of liquid metal, but that’s also difficult to measure – not to mention expensive and occasionally hazardous. So Blackman and his colleagues took the simplest approach, with springs instead of magnetic fields and weights instead of clouds of charged materials. They filled concentric rotating cylinders with water, and attached a weighted ball with a spring to the center. By spinning the cylinders, they could reproduce the effects of MRI.

The Princeton experiment used water-filled cylinders, a spring and a ball as an analogy to MRI. (Credit: Eric Edlund and Elle Starkman)

The Princeton experiment used water-filled cylinders, a spring and a ball as an analogy to MRI. (Credit: Eric Edlund and Elle Starkman)

It’s a simple enough analog, but one that no one had bothered trying before. And it turns out that MRI works just as researchers have long predicted, pushing close materials in and farther materials out. “No matter how much we think something is true and how plausible it sounds,” Blackman says, “When you can test it, that makes it more robust.”

This result may not be surprising, and it may not change how astronomers understand star and planet formation. But it is the most fundamental function of science: proving by experiment something that people up until now have only believed to be true.