Thanks to LIGO and Virgo detectors, scientists have finally heard the 7-billion-year-old 'bang’ from the creation of an intermediate-mass black hole. 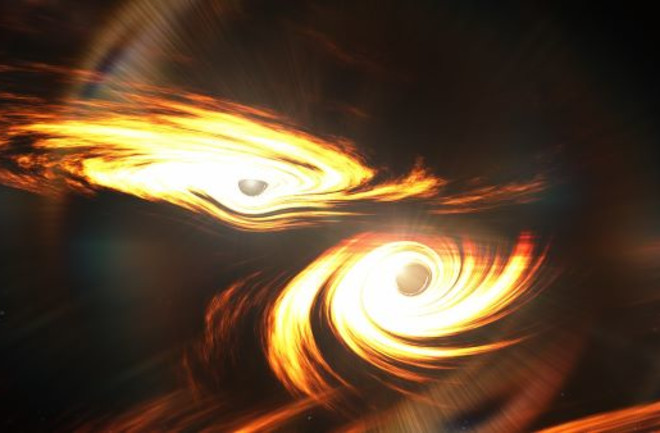 LIGO and Virgo have detected the heftiest black hole merger to date, giving birth to a new black hole that weighs in at some 142 solar masses. This cosmic middleweight is the first direct observation of the birth of an elusive intermediate-mass black hole. (Credit: Mark Myers, ARC Centre of Excellence for Gravitational Wave Discovery (OzGrav))

Within five years of detecting the first gravitational waves, LIGO and Virgo scientists have yet again helped advance our understanding of the cosmos.

On May 21, 2019, researchers identified a unique set of gravitational waves, or ripples in the fabric of space-time, that they haven’t seen before. For one, the waves came from halfway across the universe, or about 7 billion light-years away, making it the most distant gravitational-wave signal ever detected.

The observations and further details of the discovery were published September 2 in Physical Review Letters, while an analysis of the signal and its implications were published the same day in The Astrophysical Journal Letters.

The merger signal, called GW190521, lasted only a tenth of a second — but scientists immediately realized it was extraordinary in comparison to LIGO’s first detection in 2015.

“This doesn’t look much like a ‘chirp,' which is what we typically detect,” said Virgo member Nelson Christensen in LIGO’s press release. “This is more like something that goes ‘bang,’ and it’s the most massive signal LIGO and Virgo have seen.”

Unsurprisingly, this strange signal was produced by the merger of two equally weird black holes with masses of about 66 and 85 solar masses, which raises a few questions regarding their formation.

During a typical stellar lifetime, stars are able to support their weight because internal fusion generate an outward force that balances the inward crush of gravity. But if a star is massive enough, once it runs out of fuel, it can no longer fight gravitational collapse. Ultimately, the core of such a star collapses under its own weight before rebounding back out as a dramatic supernova.

But any star that could theoretically form a black hole between 65 to 120 solar masses, like either progenitor of this unique merger, doesn’t explode as supernova. That means there shouldn’t be any black holes born from collapsing stars in that mass range.

Instead, when a star that large begins its death throes, a phenomenon known as “pair instability” kicks in, and the star becomes unstable to the point it avoids gravitational collapse — at least, for a while. And when it does finally explode, it leaves nothing behind. (On the other end of the spectrum, stars above 120 solar masses never go supernova because they collapse directly into black holes.)

“Several scenarios predict the formation of black holes in the so-called pair instability mass gap: they might result from the merger of smaller black holes,” said Virgo collaboration member Michela Mapelli in Virgo’s press release. “However, it is also possible that we have to revise our present understanding of the final stages of the star's life.”

That isn’t the only weird aspect of this gravitational wave event, though. The ‘bang’ Christensen mentions was picked up by the more ‘catch-all’ approach that LIGO and Virgo use to identify gravitational waves. Rather than humans combing through the data, algorithms seek out any signals that look odd or intriguing.

While unlikely, the researchers admit the signal’s strangely short duration, combined with other weird aspects, mean GW190521 could have been produced by something completely unexpected. But that's part of the excitement. “What if something entirely new produced these gravitational waves?" asked LIGO collaboration member Vicky Kalogera in a Northwestern press release. "It's a tantalizing prospect.”

In their paper, the scientists briefly consider what other kinds of sources could be responsible for this first-of-its-kind signal. One possibility is that the collapse of a star within our own Milky Way could have produced a similar frequency. But researchers think that's unlikely because other indicators of a local supernova, such as neutrinos, are missing. Another possibility is the signal is the result of a cosmic string — a hypothetical defect in space-time produced in the first few moments following inflation. Or perhaps, the two progenitor black holes were not formed through mergers or stellar collapse, but instead started off as primordial black holes.

While these alternative explanations are improbable, they still reveal how many potential avenues gravitational-wave research may unlock. Or, as Virgo spokesperson Giovanni Losurdo said: “The observations made by Virgo and LIGO are shedding light on the dark universe and defining a new cosmic landscape."