Scientists Are Ready to Build Some Galaxies

Thanks to recent observations and telescopes that will come online soon, a detailed account of the 13.7-billion-year history of the cosmos is finally within reach. 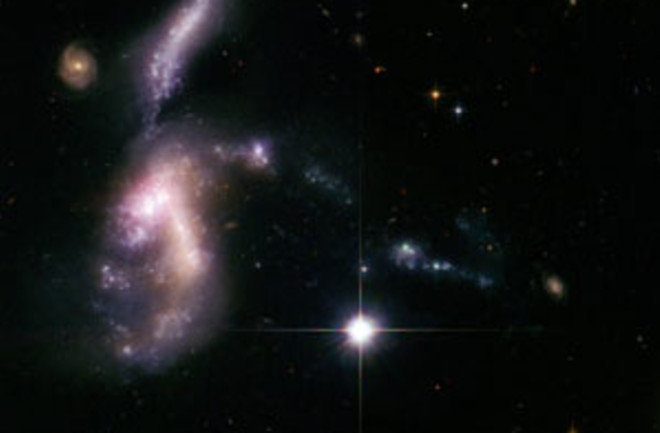 Dwarf galaxies, like the ones in the HIckson Compact Group 31 (small blobs at right), have presented a big challenge to cosmology.NASA, ESA, J.English(U. Manitoba) and the Hubble Heritage Team (STSCI/AURA) | NULL

In the beginning there was light: the hot fireball of the Big Bang. But the story of the universe really begins more properly with dark. The first structures to emerge from that early conflagration were enormous strands of dark matter, a material unaffected by the radiation still ricocheting around the early universe. Over millions of years, the gravitational pull of these strands attracted normal matter, which gradually collapsed into stars and galaxies. Smaller galaxies merged to form larger ones, giving rise to massive elliptical blobs and to shining pinwheels like our Milky Way.

Or so the current view holds. Astronomers have created a detailed theory of how the universe evolved from its fiery origins to the galactic zoo we see today. This picture of cosmic evolution, known as the cold dark matter (CDM) model, fits remarkably well with most observations. Until recently, though, a few stark problems stood out. Some galaxies have shapes that look nothing like astronomers’ predictions, while other galaxies that they expected to see never showed up. Supercomputer simulations and new images from the world’s great observatories are finally filling in the gaps. As a result, scientists can—for the first time ever—provide a detailed life history of the cosmos.

One of the most vexing mysteries has concerned the shape of dwarf galaxies. The CDM model predicts that they should accumulate bulges of stars at their centers, surrounded by halos of dark matter held in place by gravity. In reality, observations showed that most dwarfs lacked this structure. A recent study may explain why. The key ingredient is violent stellar explosions, or supernovas, inside the developing galaxies. Because visible matter, including stars, is thought to make up just one-seventh of all the matter in the universe, many simulations left it off the table. But supernovas can blow material out of the dwarf galaxies’ inner regions. So Fabio Governato, an astronomer at the University of Washington, and his colleagues simulated dwarf galaxy formation on supercomputers, this time with supernova explosions in the mix. They found that their virtual dwarf galaxies mimicked the genuine article, lacking both a central bulge and a dark-matter halo. “This is a simple mechanism that we know exists, and it explains two long-standing puzzles in dwarf galaxy formation,” Governato says.

Understanding the origin of small galaxies turns out to be important for understanding how all galaxies form. “Dwarf galaxies are the building blocks for galaxies like the Milky Way,” Governato notes. “Getting the bricks right is important.” The notion that large galaxies were built up from smaller pieces is called hierarchical formation. In the CDM model, this theory predicts that galaxies in the early universe should have been much smaller than modern ones. As researchers harvest light from the far reaches of space—in effect looking back billions of years through time—they are finding evidence confirming their expectation. This past January, a new Hubble Space Telescope image revealed the deepest view of the universe yet. It shows galaxies dating to just 700 million years post–Big Bang. Ivo Labbé, a Hubble fellow at the Carnegie Observatories, examined the color and brightness of the fledgling galaxies to estimate their masses and ages. The galactic infants appear to have just 1 percent of the mass of our Milky Way, matching astronomers’ predictions. “These little galaxies are just what cold dark matter predicted,” says Joel Primack, a physicist at the University of California at Santa Cruz and one of the model’s architects. But along with the confirmation came a new surprise: It appeared that these cosmic building blocks had already been forming stars for a few hundred million years, meaning we are “not yet reaching the zero hour of galaxy formation,” Labbé says. “But we’ve just about exhausted what we can do with current telescopes.”

To understand the birth of the earliest galaxies, astronomers eagerly await the next generation of instruments. The James Webb Space Telescope is slated for launch in 2014. Its 21-foot mirror will gather nearly seven times as much light as Hubble, and its detectors will be optimized to pick up infrared rays from very distant galaxies, whose light has been stretched and reddened by the expansion of the universe. Webb may be able to spot protogalaxies as they were just 250 million years after the Big Bang. Supersize ground telescopes—such as the Thirty Meter Telescope planned for Mauna Kea, Hawaii, and the European Extremely Large Telescope, spanning 42 meters (140 feet)—will help astronomers probe the properties of the first galaxies, starting around 2018.

The new tools could help resolve another long-standing mystery, known as the missing satellite problem. “CDM predicts that galaxies like the Milky Way should be orbited by tens of thousands of clumps of dark matter,” says Beth Willman, an astronomer at Haverford College. Yet the latest studies, which push current telescopes to the edge of their limits, have turned up only two dozen of these faint satellites. So where is the other 99.9 percent? Alternative “warm dark matter” models of cosmic structure—in which galaxy formation was seeded by lighter, faster-moving particles that would not have clumped together as readily as cold dark matter—could eliminate the need for the missing galaxies. Unfortunately, warm dark matter models fail to reproduce the galaxies we see today, Governato says.

Willman thinks that the swarm of dark galaxies is out there, waiting to be uncovered by sensitive sky surveys. The nearly invisible satellites may be among the best places to nail down the identity of the enigmatic dark-matter particles thought to drive galactic evolution. High-energy gamma rays, perhaps a product of collisions between dark-matter particles, may stream from these wraithlike satellites. The Fermi Gamma-Ray Space Telescope, launched two years ago, is on the hunt for such signals. If successful, it could give physicists insights into the properties of dark matter and help nail down the identity of the mysterious unseen stuff that has so dominated the development of our universe.

Dark matter Invisible material thought to make up the majority of the mass of the universe. Astronomers infer its existence from its gravitational effects on normal matter.

Cold Dark Matter Model A leading model of the universe's evolution since the Big Bang, in which slow-moving dark-matter particles clumped together, seeding the formation of galaxies and galactic clusters.

Hierarchical Formation Creation of large structures from many smaller ones; a likely mechanism for forming big galaxies.

Warm Dark Matter Model An alternative to CDM, with faster-moving particles. It resolves a major problem in CDM but does not describe existing galaxies as accurately.