Spin doesn't make atoms look like little tops, unfortunately, but at least it can be seen. 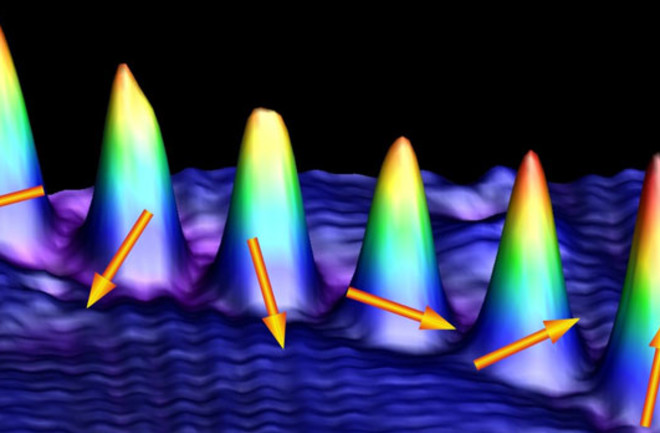 Quantum spin is one of the most fundamental properties defining the physical state of an atom or a subatomic particle, and also one of the most mysterious: Although it has mathematical similarities to spinning in the familiar sense, it is an oddly abstract attribute, and it does not mean that particles actually rotate like little tops. But if seeing is believing, we just got closer to enlightenment. Researchers in Germany and the United States recently captured the first images of atomic spin.

The team used a scanning tunneling microscope to scrutinize cobalt atoms. In the resulting image, “the atoms look like little hats,” physicist André Kubetzka of the University of Hamburg says. The pointiest hats show atoms with an upward spin direction, while those with a dimple at the top have a downward spin. (Magnetic interactions with the surface below the atoms produced in-between spin states, which have their own dimple patterns.) Using the magnetic tip of the microscope to move the atoms around, the physicists also managed to shift their spins. “The shape of an atom’s electron cloud depends on the spin direction,” Kubetzka says, so adjusting the spin altered the appearance of the dimples in the images. The ability to manipulate spin could eventually pave the way for fresh types of data storage, where information is encoded in different spin states.