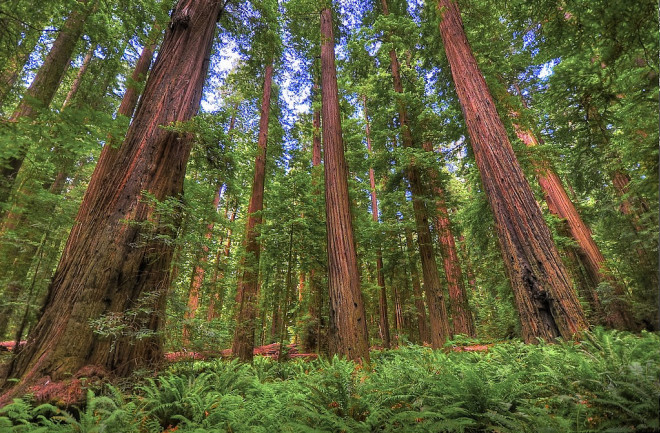 California redwoods at Humboldt State Park (Image Credit: Steve Dunleavy/Flickr) Citizen scientists collect data to find out how climate change impacts redwoods “The redwoods, once seen, leave a mark or create a vision that stays with you always. No one has ever successfully painted or photographed a redwood tree. The feeling they produce is not transferable. From them comes silence and awe. It’s not only their unbelievable stature, nor the color which seems to shift and vary under your eyes, no, they are not like any trees we know, they are ambassadors from another time” John Steinbeck, Travels with Charley: In Search of America. Anyone who’s ever been in a redwood forest knows the sacred experience Steinbeck described in his famous book. Even my dog Kia, on her first hike along the hooded trails of Sanborn Park near our home, bowed uncertainly at the hush of that forest’s redwoods and gazed with wonder at its canopied sky. While photos may fail to replicate the stature of these magnificent trees, they can help conservationists protect them. Five years ago, a nonprofit in San Francisco called Save the Redwoods League (which buys, protects, and restores redwood habitat) started a citizen science projected called Redwood Watch. Volunteers in the project take photos of redwoods using an app called iNaturalist and the data they collect is helping conservationists better understand redwood distribution and take strategic measures to protect these iconic trees. “You’d think we’d know where every redwood tree is, but we don’t,” said Deborah Zierten, Education and Interpretation Manager for the Save the Redwoods League. “This projects helps us refine our maps.” The Save the Redwoods League, which is heading into its centennial anniversary soon, will use the data from Redwood Watch to create restoration plans for the organization’s next 100 years, Zierten said. In particular, the organization is interested in understanding how climate change may be impacting redwoods and their ecosystems and how to help the trees adapt and survive, she said. In California, Redwoods grow within a narrow 450-mile strip that hugs the coast from Big Sur to just over the Oregon border. In the winter months, the trees rely on rainfall and in summer they get the water they need by absorbing coastal fog through their needles and roots, Zierten said. This could make them vulnerable to drought and temperature changes. Interestingly, redwoods are one of the best protections the planet has against climate change. Old growth redwoods (trees that are over 200 years old and that survived the gold rush of logging) can take in three to five times more carbon from the atmosphere than any other force on the planet, Zierten said, making them one of the best carbon sinks. Their high branches are so dense, intertwined, and coated with decomposing needles that new trees actually take root and grow on them high above the ground. Of the original coastal redwood range, only about 5% of the old growth forest is left. In addition, 26% of redwood timberland habitat (forests that have been logged and replanted) has been lost to roads and other development. “One of our goals is to make sure the remaining forests remain protected,” she said, against development, fire, invasive species, and other threats. The Save the Redwoods League encourages volunteers to not only photograph redwoods, but to also photograph the plants and animals that rely on old growth and newer timberland redwood forest ecosystems. These include threatened species such as the Spotted Owl and Marbled Murrelet; Black Bears and Pacific Salmon; the Pacific Fisher; the Marten; and plants like Huckleberry and many types of lichen. Volunteers have already collected more than 2,000 observations and the organization plans to continue the project well into the future to preserve these awesome, silent “ambassadors from another time.”