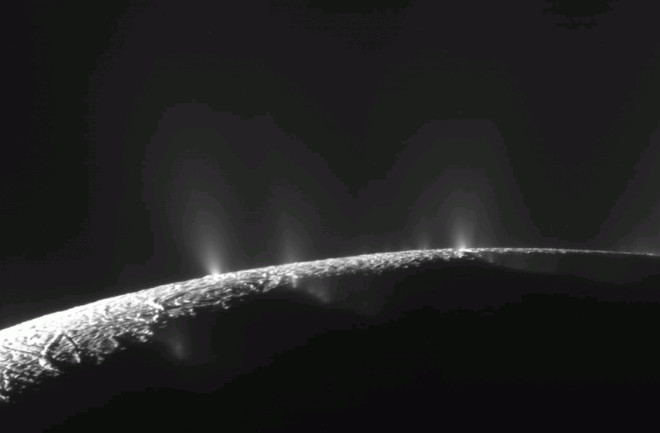 Giant plumes of ice as photographed by the Cassini spacecraft during a 2009 flyby of Enceladus. Credit: NASA/JPL/SSI Saturn is often called the most beautiful planet because of its striking rings, but its myriad moons also fascinate and inspire scientists. Now scientists know how the ringed world controls the impressive ice geysers on one if its moons, Enceladus. In 2005, the Cassini probe discovered plumes of water jetting out of the south pole of Enceladus, making the tiny moon (about 300 miles wide) one of the few destinations in the solar system with observed geological activity. Though astronomers are still working to understand the distant world, a new Naturestudy shows that, as previously suspected, Saturn’s gravitational pull controls the activityof Enceladus’ plumes.

Enceladus' ocean beneath the ice

Previous studies had determined these plumes to be mostly water vapor and salty ice, with a few organic compounds thrown in. This implies a large reservoir of water beneath the icy surface of Enceladus’ south pole, which — when combined with the organic chemistry likely going on — makes for a potentially habitable environment. In 2007, scientists proposed a model of the moon that included such a reservoir, and that also predicted regular changes to the plumes’ appearance, depending on the moon’s distance to Saturn. This is exactly what the new study finds. Enceladus takes only 1.37 days to complete its elliptical orbit, so over the years Cassini’s instruments have had numerous opportunities to observe how the plumes change with orbital distance. After analyzing 252 images, carefully accounting for the different viewing angles and lighting conditions, the study’s authors clearly observed brighter plumes when the moon was farther from Saturn. At the extremes, they found the plumes were about 4 times brighter at Enceladus' farthest point from Saturn than at its closest.

This indicates that more material gets spurted out at those times, consistent with the 2007 hypothesis. That's because when the moon is closer to Saturn it feels a greater gravitational pull from the planet. That forces squeezes the fissures on the south pole closer together, allowing less material through into the plumes (which are powered by internal pressures). This is great news for scientists studying Enceladus — not just because they finally have some hard evidence supporting their 6-year-old model, but because it also means the moon really is as interesting as they thought. Enceladus was called the most habitable spot for life in the solar system (beyond Earth) two years ago. This study adds further evidence that its south pole area has some pretty habitable conditions. The better we understand this tiny, exciting, distant world, the more likely we are to find out whether it truly is a place capable of life — including, potentially, our own.