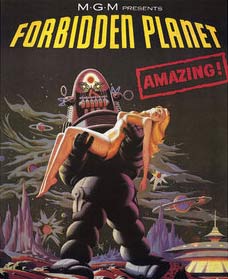 Remember the movie Forbidden Planet? (If you haven't, shame on you! -- go out and rent it). The movie was ground-breaking in many ways, one of which was the use of electronic noise instead of music in the background. It gives the movie, a strange, eerie, unearthly feel to it. It turns out, sometimes, that nature imitates art. Our story starts in the center of the solar system, where a wind blows from the Sun. This wind is ethereal, wispy, and makes a laboratory vacuum seem like maple syrup. It's no warm earthly breeze; it's more of a sandstorm, comprised of billions of tons of electrons, protons, and other subatomic particles leaving the Sun every second. It's also fleet: it screams along at a million miles an hour, flowing ever-outward into space. ... unless something is in the way. Planets, for example, are an obstacle for this wind. If a planet has a magnetic field, it can deflect the particles, bending them and guiding them down onto the planet. They hit the atmosphere and slow down, generating radio waves. These waves can be recorded, and translated into sound in much the same way radio station signals are when you listen on your car radio (remember them? Before podcasts and MP3s). The sounds generated this way are... well, they're weird. Creepy. They whistle, chirp, whoop, and moan. I found these sound files a few years back when I was doing some research on converting electromagnetic data like radio waves into sound. I'm telling you, they are downright alien. You'd swear nothing on Earth would make that noise... but there you are. 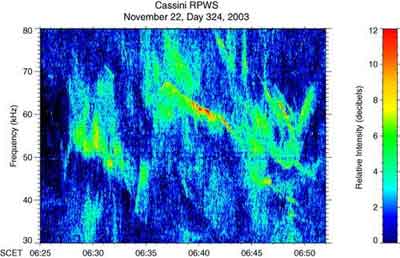 But now the weirdest of them all has come out. The Cassini spacecraft is orbiting Saturn, and it has a radio wave detector on it. When the solar wind particles move along Saturn's magnetic field, they generated radio waves with wavelengths that are kilometers long. The Cassini scientists converted them into sound. Want some nightmares tonight? Play the results while you're in bed tonight. Yikes. Sweet dreams... "... monsters from the id! [...] The fool, the meddling idiot! As though his ape's brain could contain the secrets of the Krell."