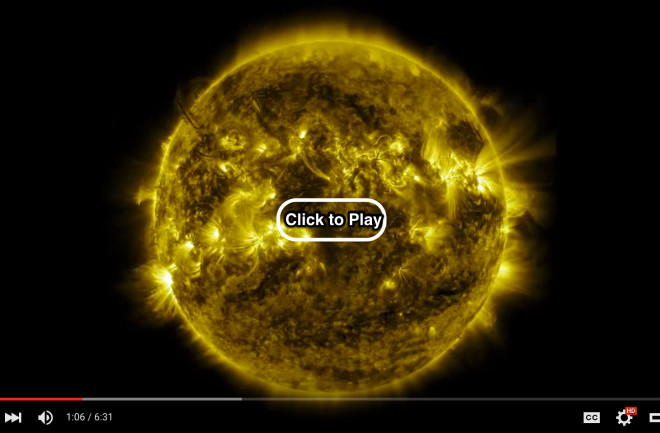 This video shows a closeup satellite view of the Sun for almost an entire year (from Jan. 1, 2015, to Jan. 28, 2016), in the form of one time-lapse sequence. The images in the animation were captured by NASA's Solar Dynamics Observatory spacecraft. Try to watch it at full, 4K resolution. (Source: NASA) Since NASA's Solar Dynamics Observatory spacecraft became operational in late April of 2010, it has provided a trove of valuable data — and mind-boggling views of the Sun. This past year was no exception, as the video above shows. It consists of imagery acquired by SDO from Jan. 1, 2015, to Jan. 28, 2016, in one stunning time-lapse sequence. Click to play it on YouTube. And if your internet speed is high enough, watch it in ultra-high definition: 3840 x 2160 (in other words, 4K) and 29.97 frames per second. At this level, the video consists of one SDO image taken every two hours for almost a year. SDO's Atmospheric Imaging Assembly (AIA) instrument actually captures a shot of the Sun even more frequently than that: once every 12 seconds — and in 10 different wavelengths. The images that went into this time-lapse video were acquired at a wavelength of 171 angstroms, which is in the extreme ultraviolet (and invisible to our eyes). Viewing the Sun at this wavelength allows us to see the ebb and flow of million-degree-Fahrenheit material in the Sun's atmosphere, called the corona. Among other things, we can see material aligning in complex ways along the lines of magnetic force that weave through the corona. Hot, active regions glow with particular intensity. Explosive eruptions of radiation caused by the sudden release of built up magnetic energy can be seen too. So can cooler, gargantuan loops and filaments of material, called prominences, consisting of plasma flowing along twisted magnetic field lines. At about three minutes into the video, you can see a line of these prominences seeming to hover within the corona. When the twisted magnetic structures suspending a prominence within the corona become unstable, they can explode, propelling plasma outward into space in what's known as a coronal mass ejection, or CME.

Closeup of a massive filament of plasma erupting from the Sun on August 31, 2012, as seen by NASA's Solar Dynamics Observatory spacecraft. (Source: NASA) The closeup above is one of the more dramatic examples of a solar eruption captured by SDO. The resulting CME struck a glancing blow to Earth's bubble of magnetic energy, the magnetosphere. Here's a video of the same eruption, showing the event from different perspectives and in varying wavelengths.

Screenshot from a video based on SDO imagery showing a giant filament erupting from the Sun on Aug. 31, 2012. (Source: NASA) I particularly love the greenish coloring — and also what's left behind after the eruption.

Source: David Cartier, Sr. via NASA Those green tones match beautifully the aurora that ignited over the skies of Whitehorse in Canada's Yukon Territory on Sept. 3, 2012, when the CME jostled Earth's magnetosphere. Click on the thumbnail at right to see a beautiful photo of the display shot by David Cartier, Sr. (It will open on NASA's website.) Lastly, I'll leave you with one of SDO's most recent images of a solar prominence. It was acquired on Feb. 3, 2016. NASA calls it an "unraveling prominence," for reasons that I think will be clear when you click on the image and then watch a time-lapse video of the event:

Screenshot of a Solar Dynamics Observatory video showing an elongated solar prominence rising up above the Sun and slowly unraveling over 17 hours on February 3, 2016. (Source: NASA) Launched on Feb. 11, 2010, SDO recently observed its 6th anniversary in space. It's primary science mission was supposed to last a little over five years. We're past that now, and the spacecraft seems to be going strong. When launched it had enough fuel to do maneuvering for 10 years. So if all goes well, we'll continue to enjoy spectacular imagery, and science, from SDO for some years to come.