Sampling the Slopes of Mt. Kilimanjaro to Tackle one of Biology's Biggest Questions 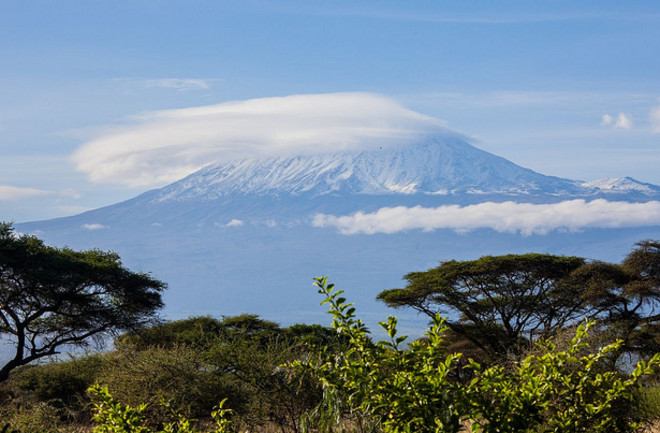 Quantifying plant and animal diversity on Africa's tallest mountain (Image: Flickr/Ninara). Take a look outside your window. How many species do you see? This question of how geography influences biodiversity has bedeviled biologists for centuries. But according to a new study led by Marcell Peters from the University of Wurzburg, the number of distinct species you’re seeing – or, more accurately, the number you would see in the nearest natural environment – depends most strongly on temperature. Several hypotheses have percolated through the scientific literature over the years: 1) The temperature hypothesis, in which the greater rate of biological processes, interactions, and evolution associated with higher temperatures is the main determinant of diversity. 2) The water availability hypothesis, proposing that water supply underlies primary productivity and enables more diversity at higher trophic levels. 3) The productivity hypothesis, linking maximal diversity with a greater abundance of life’s required nutrients. 4) The area and geometric constraints hypotheses, which link diversity and the availability of distinct niches to more space or geographic gradients. 5) The plant diversity hypothesis, connecting animal diversity to the number of consumable plant species. All of these different possibilites have remained in the discussion for so long because diversity studies typically examine a single type of organism. So while vascular plants are subject to the water availability hypothesis, arthropod distributions are best described by the plant diversity hypothesis. But by looking beyond the species concept and considering ecological function, Peters and his colleagues arguably developed a more relevant approach. For example, while bees generally do best in warm environments, syrphid flies thrive at cooler temperatures, Looking at each type of insect individually suggests a tight thermal constraint on viability, but if both are considered together as flower pollinators, this function becomes more resilient and relevant across a wider range of conditions. The team of scientists – which includes more than two-dozen participants – also got a nice backpacking trip out of the deal. The fieldwork happened on Mt. Kilimanjaro: as a tropical mountain with a dry base, its temperature and primary productivity are not well correlated, allowing the researchers to evaluate these variables independently. They counted the number of species in eight categories of plants and 16 types of animals, up and down the mountain, covering 3.7 kilometers of relief. The elevation-based distributions are fascinating, prompting a barrage of questions. Several types of animals, like amphibians, birds, and bats showed rapid diversity decreases as the researchers ascended. Others, like gastropods, spiders, and wasps, seemed to have a preferred high-diversity niche part way up the mountain. But when all the data were assembled, the number of observed species decreased with elevation, providing “strong support for temperature as the major predictor of plant and animal species richness,” as Peters writes. A statistical analysis of six environmental variables revealed temperature as the clear winner. Net primary productivity and precipitation were statistically significant variables for roughly half as many plant and animal categories, but the directionality of the effect (positive or negative) was split. On the other hand, four plant and eight animal groups showed significantly increased diversity with increasing temperatures; only millipede diversity decreased. While the numbers were convincing, Peters and his colleagues are quick to point out that ecosystems operate in complex ways, and many of the parameters hypothesized to play an important role actually interact with each other. Higher temperature, for example, can influence plant diversity, and precipitation levels bolster primary production levels. By building models to disentangle the direct and indirect levers of these “master variables”, the team proved that temperature alone – not its effects on other environmental parameters – was indeed the key factor. This impressive effort to compile several distinct datasets in one analytical pipeline helps to streamline the list of diversity-generating hypotheses; seeing how future studies build on this result will be intriguing. For example, while higher temperature led to more diversity on Kilimanjaro, that relationship cannot be extrapolated to ever-higher temperatures: there is clearly an optimal diversity-promoting temperature that is still to be determined. And it may differ for distinct biomes, based on local evolutionary pressures and the interplay of secondary factors like precipitation or nutrient availability. Understanding how plants and animals are distributed across the planet is a fundamental issue for biologists; now, extended field campaigns and statistical tools are rising to the challenge.