Sakurajima Lets Out a Spectacular Eruption After Months of Quiet 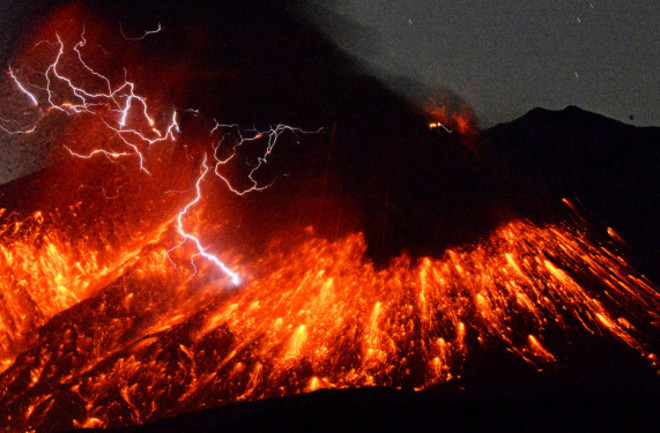 Volcanic lightning is seen at an eruption of Mount Sakurajima, in this photo taken from Tarumizu city, Kagoshima prefecture, southwestern Japan, in this photo taken by Kyodo February 5, 2016. Kyodo/REUTERS Things had been quiet at Japan's Sakurajima for the past few months, but today the volcano unleashed an impressive explosive eruption. If you watch the video of the eruption, you can see incandescent volcanic bombs and ash being hurled hundreds of meters into the air---and the eruption even generated some of its own lightning. I've seen some brief reports of a lava flow from the eruption as well, but this would be a bit of a surprise based on Sakurajima's usual eruption style. I have yet to see any images or confirmation of a lava flow, so I'd take that news with a grain of salt. Images and video of the eruption show those glowing blocks of debris moving downhill, but those are not lava flows. Although the footage would suggest otherwise, the blast itself wasn't particularly strong for Sakurajima. When it is in an eruptive period, the volcano can regularly throw volcanic bombs and ash multiple kilometers from the active vent---this eruption was doing just that. What is most notable here is more that Sakurajima had been quiet for so long (in this case, months), when it has produced hundreds of eruptions per year over the last half century. As a precaution, the Japan Meteorological Agency increased the exclusion zone to 2 kilometers from the vent and raised the alert status to 3 (of 5). The JMA thinks that this explosion is a resumption of the eruptive period that had waned in September 2015. You can watch Sakurajima from one of the many webcams pointed at the volcano. The JMA has some webcams pointed at the volcano as well: Just select the 6th and 7th from the bottom of the scrolling list to the right.