Sakurajima in Japan Might Be Headed Towards a Large Eruption 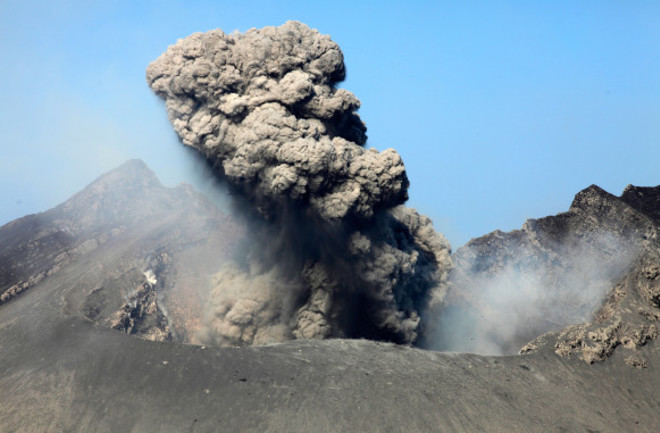 Sakurajima Volcano erupting, with ash cloud rising from Showa Crater on Japan's most active volcano, 2012. Dr. Richard Roscoe/Getty ImagesOfficials in Japan are preparing for what could be a large explosive eruption from Sakurajima. The Japan Meteorological Agency has raised the alert status to Level 4 after new earthquakes and rapid inflation of the volcano suggest that Sakurajima could be preparing for a repeat of the 1914 explosive eruption that produced numerous fatalities. Level 4 alert means that people living near the volcano need to prepare for evacuation if conditions continue to worsen. Right now that is limited to ~4,000 people on the same island as Sakurajima, but ash from any eruption (depending on the winds) could impact Kagoshima (population ~600,000), located only 10 kilometers from Sakurajima. There is also concern that a large eruption could cause workers at the restarted Sendai nuclear power plant, 50 kilometers from Sakurajima, to need to leave the plant. Sakurajima is one of the most consistently active volcanoes in Japan, typically producing hundreds of small explosions each year. Over the last year, there has been growing concern that its activity is consistent with records of events prior to the volcano's last few large eruptions. The swarm of earthquakes from Sakurajima have been centered only a few kilometers beneath the Minamidake vent of the volcano and since yesterday morning, strain meters installed in the volcano have shown dramatic changes typically associated with magma rising into the main edifice of the volcano. In 2013, the volcano produced a large explosive eruption that sent ash over 6 km (20,000 feet) upwards.

Changes in earthquakes at Sakurajima over the past day, with a sharp increase on August 15.

Sakurajima is actually part of the Aira caldera. All of the activity for the past few thousand years at Aira has been ay Sakurajima, including large VEI 4-5 eruptions in 1914, 1781 and 1471-76. There has definitely been some recent hype about the potential effects on Japan of a large eruption from Sakurajima/Aira. However, at this point there are no signs that a truly massive eruption, to the scale that formed the Aira caldera itself over 22,000 years ago, is in the works. You can watch the volcano live on one of the many webcams pointed at Sakurajima. I'll try to update this post with more information as the situation changes in Japan. {Special thanks to Mike Ross, Chris Pearce and F. Ikegami for information and links in this post.}