Russia's Dark Horse Plan to Get to Mars 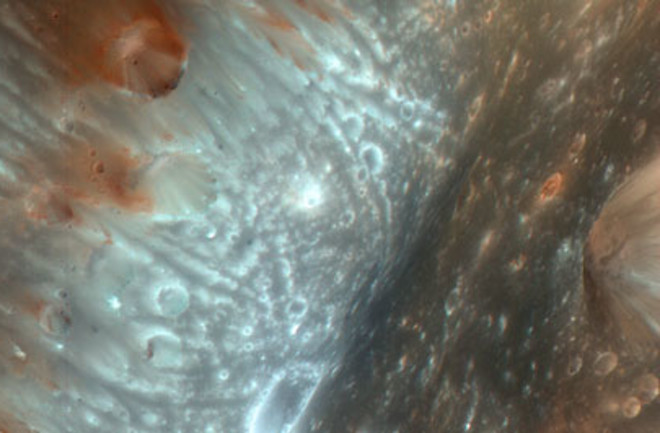 The Martian moon Phobos may be an asteroid captured by Mars's gravity. | NASA/JPL/University of Arizona

Mars has been nothing but bad luck for the Russians. They have launched 20 probes to the planet since 1960, and all either failed or suffered from severe technical problems. But soon—as early as this October—Russia will attempt to reverse its fortunes with one of the most ambitious unmanned space missions ever.

Instead of aiming straight for Mars, the Russians are going after Phobos, the larger of its two little satellites and one of the oddest objects around. Their probe, called Fobos-Grunt (“Phobos soil” in Russian), will not only land on Phobos but also scoop up some samples of the surface and send them to Earth. Understanding Phobos could tell us a lot about the early history of the solar system. “It may give us clues to the formation of Earth’s moon and the moons of the other planets, and the role played by asteroid impacts in shaping the terrestrial [rocky] planets,” says Alexander Zakharov of the Moscow-based Space Research Institute and chief scientist for Fobos-Grunt. Even more important, this mission could lay the groundwork for an innovative strategy for exploring—and even colonizing—Mars itself.

Phobos is very different from our moon. It is a potato-shaped rock measuring only 12 miles by 17 miles, nearly as dark as coal, and dominated by a six-mile-wide crater called Stickney, evidence of a collision that nearly shattered the puny satellite. Phobos circles just 3,721 miles above the Martian surface (Earth’s moon averages a distance of 239,000 miles) and completes an orbit in 7 hours and 39 minutes, making a Phobos “month” on Mars less than one-third of a Martian day. In fact, Phobos circles so close to Mars that tidal forces are slowly causing its orbit to decay. Within the next few tens of millions of years it will crash into the planet; we are catching it at the tail end of its 4.5-billion-year life.

The same proximity to Mars that will one day doom Phobos makes it an extremely attractive staging post for human explorers. One side of Phobos always faces Mars, and on that “hemisphere” the planet dominates the sky. This makes Phobos a good place for monitoring most of the Martian surface. Moreover, any manned outpost on Phobos would be well shielded from space radiation—protected on one side by Mars and on the other by the satellite’s own bulk. From Phobos humans could explore the planet’s surface remotely using robots, eliminating the agonizing 10- to 20-minute delay that the operators of NASA’s Mars rovers currently have to endure. Phobos would also be a natural staging area for manned excursions to Mars.

Hebes Chasma, a Martian valley where water once flowed, could be studied in detail from Phobos. Phobos's soil may also contain debris blasted off Mars by ancient impacts. | ESA/DLR/FU Berlin (G. Neukum)

Before we start drawing up plans for outposts on Phobos, though, we need a much better grasp of what kind of place it is. Right now scientists do not even know exactly what Phobos is made of. It appears similar to a group of asteroids known as carbonaceous chondrites. These primitive objects contain amino acids, the building blocks of life, and appear to be nearly unchanged fragments of the material from which the solar system formed. Scientists have speculated that a rain of carbonaceous chondrites may have seeded early Earth with the raw material for biology here. Phobos’s distinctive composition has led some scientists to suspect that it (along with Deimos, Mars’s other miniature satellite) might be a captured asteroid. But that is far from a foregone conclusion.

The surface of Phobos (left) is very different form that of the smaller Martian moon Deimos. Scientists do not yet know why. | NASA/JPL-Cal Tech/University of Arizona

“Phobos is a funny object,” says David Beatty, chief scientist of the NASA Mars Exploration Directorate. “It’s kind of a mystery why Phobos is there and where it came from.” RKA, the Russian space agency, hopes to get some answers by having Fobos-Grunt gather samples of Phobos’s battered surface. Back on Earth, detailed analysis will identify their precise composition and age. (A suite of onboard instruments will also do some analysis on Phobos.) From this we should get new insights into the history of Phobos and a broader snapshot of what our solar system was like in its formative days.

In this mission, Fobos-Grunt will get a huge assist from the laws of orbital mechanics. Owing to the counterintuitive rules of space navigation, it takes remarkably little energy to get to Phobos from Earth. In fact, the energy required to travel between two spots in the solar system has virtually nothing to do with the distance between them. What really matters is a quantity called delta-v, the amount that a spaceship’s velocity must change to shift from one trajectory to another. Delta-v depends on how strong the gravitational fields are at your departure and arrival points; how much energy you need to swing farther out from (or in toward) the sun; and how much assistance you can get from atmospheric braking—that is, skimming through a planet’s atmosphere to help slow down.

The total delta-v required for a mission to land on Phobos and come back is startlingly low—only about 80 percent that of a round trip to the surface of Earth’s moon. (That is in part because of Phobos’s feeble gravity; a well-aimed pitch could launch a softball off its surface.) It is actually easier to send a probe or cargo to Phobos than to the moon. The comparison for a manned flight is more complicated, since a crew would need much more food and air for the six-month journey to Phobos than for the three-day trip to our moon. But the huge additional delta-v needed to get down to the Mars surface and back up into orbit again means it would be vastly cheaper and easier to maintain an outpost on Phobos than on the Martian surface.

If the mission is successful, Fobos-Grunt will be the first probe to explore the Earth-Phobos-Earth space highway. The one-ton probe will enter orbit around Mars in August or September 2010 (assuming Russia’s schedule does not slip) and begin studying Phobos remotely. Once the mission scientists have selected a good landing spot, the spacecraft will touch down on the satellite’s surface sometime in March or April 2011. Then Fobos-Grunt will extend a robot arm and start collecting samples of regolith—surface soil and rocks—for return to Earth. The main body of the probe will serve as a launchpad for the small return module and remain permanently on Phobos. When the 233-pound return module reaches Earth in June or July 2012, it will drop off a soccer-ball-size capsule containing a thumb-size canister of precious Phobos soil; finally, the canister will make a hard landing in a remote region of Kazakhstan.

Planetary scientists hope that analysis of Phobos’s regolith will shed light on the nature of the satellite’s deep interior because of the turnover between the surface and the interior over the eons. Phobos’s density is very low, about two-thirds that of ordinary basalt. This could mean that it is similar to water-rich objects in the outer edge of the asteroid belt, or it could mean that Phobos is a rubble pile, with many empty cavities between rock fragments. “The single most important issue to address on Phobos regarding the future human exploration of Mars is the question of water,” says Pascal Lee, chairman of the Mars Institute, a research organization. “Does Phobos contain any water, and if so, in what amount, form, and location? Answers to these questions will help determine how we will travel to Mars.”

Phobos’s exterior poses some riddles of its own. Its most striking visual structures (aside from the giant Stickney crater) are sets of crater chains that line up across the surface. Deimos does not have anything like them, nor do any of the half-dozen regular asteroids imaged by space probes so far. One theory is that the craters are old steam vents, relics of an ancient catastrophe that cracked Phobos’s crust and heated its interior, sending steam blasting outward. This would be good news for future human visits to Mars, as vents would mark the location of water-bearing minerals, perhaps even buried deposits of water ice. Another, less enticing possibility is that the holes are crevices opened by tidal forces or by impacts that caused the entire moon to flex.

A third theory holds that the crater chains are tied to ancient impacts on Mars. Some meteor strikes in Mars’s past were powerful enough to propel pieces of the planet’s crust at speeds greater than escape velocity, some 3.1 miles per second. We know this because scientists have found meteorites on Earth that clearly originated on Mars; these pieces evidently drifted around the solar system before landing here. If some fragments of the Martian surface reached Earth, many more of them should have hit Phobos on the way out. The swarms of rocks sent flying by a major impact on Mars might have created the crater chains seen on Phobos. In fact, by some estimates, up to 10 percent of the satellite’s surface might consist of material that originated on Mars.

Seen in this light, Russia’s Fobos-Grunt strategy looks rather clever. Despite its low profile, Phobos may turn out to be one of the most intriguing places in the solar system. And, located in a sweet spot of accessibility, it is a natural outpost for future space exploration, whether with people or with probes. If there is a key stepping-stone from Earth to Mars, this odd, intriguing space rock could be it.