Running by the Books: Math for the Marathoner 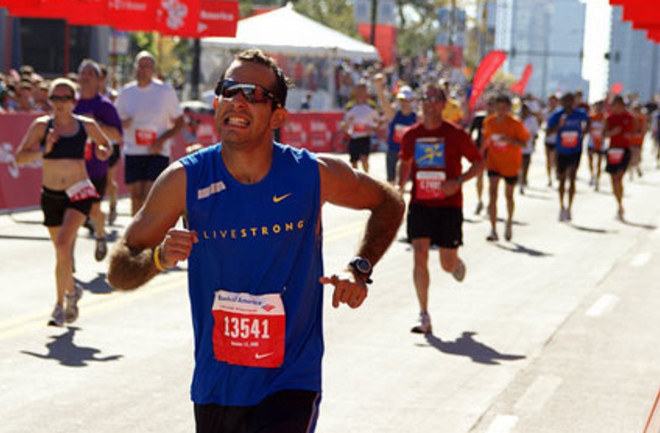 About two-fifths of marathon runners "hit the wall" on the big day. That means they completely deplete their body's stash of readily available energy, which makes them feel wiped out and severely limits their running pace; it sometimes forces people out of the run completely. Marathoner and biomedical engineer Benjamin Rapoport has been physically and mentally struggling with this phenomenon for years, and had the bright idea to turn it into a research project. He published a mathematical theory in the journal PLoS Computational Biology describing how and why runners hit the wall--and how they can avoid it.

By taking into account the energy it takes to run a marathon, the body's energy storage capacity and the runner's power, the researchers were able to accurately calculate how many energy-rich carbohydrates a runner needed to eat before race day and how fast to run to complete all 26.2 miles (42 kilometers). [LiveScience]

Rapoport's studies of marathoners were prompted by his desire to run in the Boston Marathon in 2005, and his teacher's desire for him to be in class. In return for missing class, Rapoport was tasked with giving a class lecture on the physiology of the marathoner. That same year, Rapoport himself hit the wall while running the New York Marathon.

The main limitation of a marathon runner's ability is his or her aerobic capacity--how much oxygen the muscles can take up and keep working. The other important factors are how much energy is takes the person to run, and how much energy they have stored in an easy-to-access form, glycogen. By using estimations of these numbers, Rapoport was able to create a mathematical model of how long and fast any runner could run and how much they would need to fuel up in order to finish the race.

“This is a unique area that hadn’t been addressed in the medical literature in any substantial way,” says Mark Cucuzzella, a physician and running coach based in Harpers Ferry, W.Va. “He’s lending some hard numbers to what experienced runners and coaches have been doing.” [Science News]

By estimating their aerobic ability and other factors in the model, runners can estimate what their pace should be to complete a marathon in the best time.

Rapoport’s model also shows that a slightly faster pace can be maintained by consuming a midrace snack. This carb-eating strategy can help, but it can’t win races, since the body can store only so much fuel, says Cucuzzella, chief medical consultant for the Air Force Marathon and a marathoner himself. “It’s not about how much sugar or spaghetti you eat the night before a race,” he says. “There’s a critical pace.” [Science News]

And while following this formula won't enable everyone to run a marathon without training, Rapoport has put an easy-to-use version of his unwieldy formula online